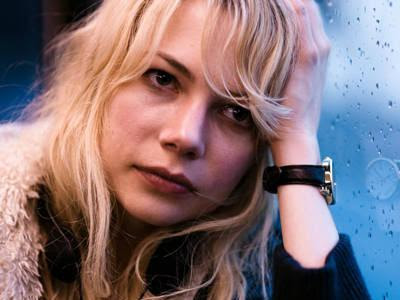 With Brokeback Mountain, Synecdoche, New York, Shutter Island and now Blue Valentine under her belt, Michelle Williams has played a fair number of disaffected wives. Fortunately, she’s managed to make each of those characters distinct, their struggles personal, unique and, most importantly, compelling. Blue Valentine may be her finest work to date as she charts her character’s journey from hope to deepest despair over the course of a few years.

Blue Valentine takes place within two timeframes. The first follows Cindy and Dean (Williams and Ryan Gosling, who should’ve been nominated as well but wasn’t) as they begin their relationship. The second shows them a few years after marriage and a child, deeply unhappy and on the verge of breaking up. The years in between are unseen but suggested in the ways that Cindy and Dean’s relationship and personalities have shifted and changed. With lesser actors a gap of this nature could be disastrous, but both Williams and Gosling are able to convey the most subtle depths of the characters. We understand how they have gotten to Point B from Point A without necessarily having to see every step of that journey.

Cindy’s sense of disappointment and frustration are palpable from her first scene (in which Dean wakes her up so that she can make breakfast for him and their daughter and then criticises what she’s made – dude, for that alone she should do more than divorce you). As the movie progresses and their history together is revealed to us, we sense that in the beginning she saw Dean as akin to a life preserver, the means through which she would escape the unhappiness of the home she grew up in, but that he’s since become an anchor. She’s sinking and struggling to break free, disillusioned by the fact that they seem to be repeating the script played out by her parents; meanwhile he’s determined to stay together and make it work, though he doesn't really want to change but, rather, wants her to settle for what they have. When she turns to him and says, “I have nothing left,” her tone leaves no room to doubt that she means it. That one line reading ultimately comes to define the film – in the end, it’s about two people at their absolute limit, one who realizes it, the other who struggles in vain against it.

Though the film is, for the most part, incredibly depressing, there are also lighter moments, moments which make us understand why Cindy and Dean got together in the first place. Williams plays these moments with just as much skill as the more dramatic scenes (one of my favourite scenes in the whole movie is Cindy and Dean’s conversation on the bus, when he informs her that since she’s beautiful she’s likely crazy and not funny; her reaction to this is priceless). Blue Valentine requires her to really put it all out there as an actor and she does it so seamlessly that you can’t tell where the character ends and she begins. This is a terrific performance from beginning to end, one which absolutely deserves the accolades received so far and would be an entirely deserving winner.