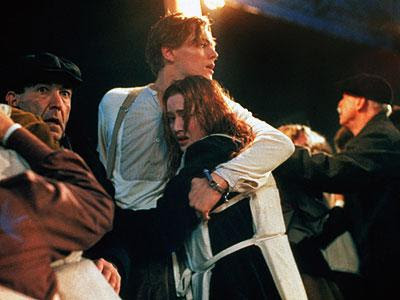 When Avatar usurped Titanic as top box office earner of all time, I must admit that I felt a bit sad. It's not that I have any particular affection for Titanic, though having been 15 when it was released of course I saw it; but I guess I felt like part of my adolescence was now gone forever. Most parts of my adolescence I've been more than happy to consign to history, but that one I didn't mind hanging on to. Prior to watching it again recently I hadn't seen Titanic in about a decade and I must say that it's a better movie than I remembered it being. Certainly it deserves better than the dismissive attitude so often applied to it.

Titanic is the story of a boy and a girl, separated first by class and then permanently by disaster. Rose (Kate Winslet) is a socialite with a pushy mother (Frances Fisher) and a brute of a fiancee (Billy Zane); Jack (Leonardo DiCaprio) is an aspiring artist travelling in steerage and so thrilled to be on this adventure that he screams: "I'm the king of the world!" It sounds kind of lame when you write it out like that but, I'll be honest, thinking about it brought a huge grin to my face. I don't think Titanic is a great movie by any stretch, but it does have a certain lingering magic.

Despite the differences in their circumstances, Jack and Rose are drawn to each other and quickly fall in love. DiCaprio and Winslet have good enough chemistry that you're willing to overlook the fact that their relationship never takes on more than two dimensions and the liveliness of their performances also makes you willing to overlook (to an extent) the fact that the story itself is pretty two dimensional. There is a degree of emotional resonance to the story, but that has more to do with certain facts - like that the people in steerage really were locked in to their doom, that desperation made getting to a lifeboat a blood sport, that flares were seen by people on a nearby boat who thought the rich Titanic passengers were just having a party and not in any distress - than it does with the narrative the film builds around those facts. The film's major preoccupation is with what happens after the boat hits the iceberg and the story only needs to be serviceable enough to hold your attention until it reaches that point.

Do I need to say how great the special effects are? Even now they still look pretty good and somehow seem less soulless than a lot of the glossy special effects work done today. Titanic is one of those films where you can definitely see where the money went, but it gets folded pretty seamlessly into everything else. Whatever faults James Cameron may have, you could never accuse him of not putting the work into his projects. Here, as with Avatar and his earlier films, if the technology wasn't there to do exactly what he wanted, he simply found a way to invent it. For this film he helped develop, amongst other things, a special deep-sea camera to capture the footage of the ship on the floor of the sea. Those shots of the ghostly ship are some of the most memorable from the entire film and go a long way towards creating the sad, ominous mood that underlines the story. The money put into Titanic was definitely money well spent.

Titanic is one of those films people raved about when it was first released but started to turn against once Hollywood raved to the tune of an 11 Oscar sweep. The hubris displayed by Cameron perhaps made it an easy target though, if you think about it, hadn't he earned the right to be a bit arrogant? Before its release, people expected it to fail - I mean, how could a film that expensive possibly make a profit? - but instead it reached a ridiculous level of success. He was king of the world at that moment. As for the film itself, while it is arguably not the best film of 1997, I think it would be difficult to make a strong case against 9 of its other Oscar wins (the 10th being its win for Best Song - don't get me started). The lack of depth to the story may allow you to dismiss the film as a pretty but empty box, but it's so pretty. There is such a strong attention to detail, such majesty to the whole production. The film is exquisitely made and even though it has its weaknesses and has been the subject of countless parodies, it's held up pretty well.