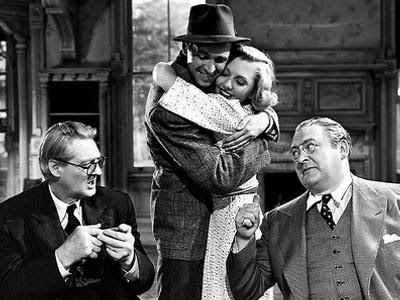 The moral of the 1938 comedy You Can’t Take It With You can be summed up in 3 words: Life is short. It’s a story about seizing the day, doing what you love to do, and making the most of the time you have. Directed by Frank Capra – his fifth movie in six years to be nominated for Best Picture and the second to win – it is a kind hearted comedy about nice people (some of whom don’t quite realize how nice they are) with a sweet romance mixed in. Capra made a lot of movies like that, but it’s to his infinite credit that he managed to make each of them unique and classic in their own way.

The story centers on the eccentric Sycamore family, headed up by Martin Vanderhof (Lionel Barrymore), known to everyone in the family and the neighbourhood as “Grandpa.” He is firmly of the belief that people should just do what they like to do and has surrounded himself with people who feels likewise, including his daughter, Penny (Spring Byington), who currently amuses herself by writing plays, and son-in-law Paul (Samuel S. Hinds), who spends his days making firecrackers, granddaughter Essie (Ann Miller), who wants only to dance, and her husband Ed (Dub Taylor), who makes candy. Grandpa’s other granddaughter, Alice (Jean Arthur), fits in easily with the clan but possesses less pronounced peculiarities, which allows her to assimilate into the rest of society. She’s fallen in love with Tony Kirby (James Stewart), the son of a wealthy banker to whom appearances are everything.

When Tony brings his parents (Edward Arnold and Mary Forbes) to meet the Sycamores it ends in disaster. Not only are the Kirbys horrified that their son wants to marry a girl they see as being so far beneath him, but everyone ends up getting arrested and spending the night in jail after the police show up to talk to Ed about some subversive messages they’ve found inside his candy boxes and Paul’s entire store of fireworks accidentally goes off during the questioning. When Tony fails to stand up to his parents as they continue to look down their noses at her family, Alice breaks things off, setting the scene not only for the climactic reconciliation of the couple but also of the coming together of the two families.

The narrative divides itself into two connected storylines, the first dealing with the relationship between Tony and Alice and the familial complications, and another storyline that has to do Mr. Kirby’s bank attempting to buy up the neighbourhood where the Sycamores live in order to build a factory. Grandpa is the resident whose refusal to sell his property has held up the deal, but Mr. Kirby doesn’t realize that until their night in jail. In a lesser film, the business storyline would be the main story, the one that drives the film forward. Instead, You Can’t Take It With You settles its focus on the love story and the class clash between the families, which allows the characters to become more fully fleshed out and engaging to the audience. This is very much a character rather than a plot driven film.

The cast is uniformly excellent, particularly Barrymore, Arnold, Stewart and Arthur. There are no true villains here, nor are there cardboard saints; both Grandpa and Mr. Kirby are given enough dimension that neither drifts towards an extreme characterization and Barrymore and Arnold deliver steady performances that make the film’s final scene feel appropriate rather than impossibly sentimental or sappy. As for Stewart and Arthur, they have terrific chemistry (chemistry that would be revisited the following year in Mr. Smith Goes To Washington) and both turn in terrific performances marked by an incredible lightness of touch. Arthur is a fascinatingly naturalistic actor, the kind who draws your eye even when she’s simply reacting to one of the other characters. She’s incredibly charming, as is Stewart, and they make for a very rootable couple.

You Can’t Take It With You is a film I wasn’t particularly looking forward to seeing because the description of it I read made it sound a little hokey (plus I’ve seen loads of stories built on the contrast between zany characters and uptight characters). However, like most Capra films, this one quickly won me over. You Can’t Take It With You is definitely a film I’ll be revisiting in the future.
Posted by Norma Desmond at 8:00 PM