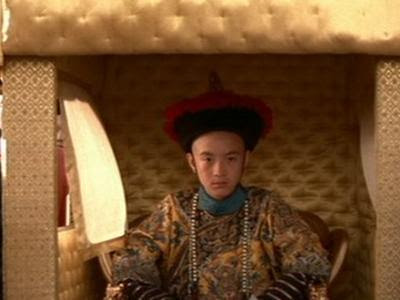 All that power - but in name only. Such was the lot of Puyi (John Lone), the last Emperor of China. Bernardo Bertolucci's lush, historical epic follows the Emperor from infancy to the end of his life, charting China's transformation from feudalism to a People's Republic as it does so. It's a big task involving a lot of complex history, but the film handles it well and delivers a sumptuous cinematic experience.

The film starts near the end of the story, with Puyi's imprisonment by the Communist government for war crimes during World War II. His time in prison is used to anchor the story, which frequently flashes back to show Puyi at various times before his imprisonment. Flashbacks are not a new narrative strategy but it works really well here because intercutting between his present day plight and his past serves to illuminate both how much his life has changed and how much it has stayed the same. Even as an Emperor he was essentially a prisoner, his life confined to the Forbidden City while he was totally cut off from what was going on outside its walls as the country was undergoing sweeping changes, and though he's now a prisoner, he still (at first) has his servants, who continue to do everything for him. The difference is simply that the lavishness of his former surroundings have been replaced by the bare essentials.

The film follows Puyi as he grows up in a position that is both privileged and, ultimately, powerless. He became Emperor at the age of 2 and "ruled" through a regent. By 1911, at the age of 5, the throne had been abdicated on his behalf and he became Emperor in name only, ruler of the Forbidden City but nothing outside its walls. In later years he was exiled and returned as a puppet Emperor bound by Japanese interests, a deal which would lead to his imprisonment after World War II. Throughout his life, his power rarely extends further than his title and he is by nature a passive character, always subject to the whims of those around him. This is somewhat problematic, in that it's difficult to drive a narrative forward when the protagonist has so little momentum.

The characters who surround Puyi, however, keep the story moving. Peter O'Toole brings a nice burst of energy to the story as Puyi's tutor Reginald Johnston, who imbues in him an interest in all things Western (there's a scene midway through the film when the Chinese army bursts into the Forbidden City in order to expel the Emperor and his family, interrupting a tennis match - the culture clash that marks this moment gives the scene a somewhat funny undertone); and there's also Joan Chen and Vivian Wu as Puyi's wife, Wan Jung, and concubine, Wen Xiu, respectively. As the story progresses and the characters begin to meet their destiny, it's Chen's lonely, opium addicted Empress who ends up becoming the most compelling figure of the piece. When Wen Xiu reaches her breaking point and walks out on Puyi, it isn't Puyi who suffers, but Wan Jung. "She was my only friend," she intones sadly; for years it was just the three of them and now it's just her and the Emperor, who have found themselves increasingly at cross purposes over his desire to align himself with the Japanese. Eventually they break from each other completely and the Empress' sad decline is heartbreaking and accounts for what is arguably the film's most moving moments.

The Last Emperor is both a beautiful looking production and a soundly constructed piece of work. It tells a massively big story both in terms of theme and in terms of narrative content, but the screenplay finds a nice sense of balance between the historical events and the fictionalized story. It isn't strictly accurate, but it tells a good and compelling story and, really, that's all you can ask from a film.