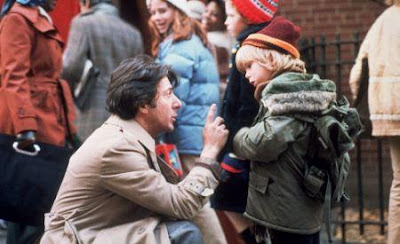 You probably couldn’t make a movie about divorce and custody issues today that is as straight forward as Robert Benton’s Kramer vs. Kramer. This very well-crafted story, adapted from a novel by Avery Corman, never descends to the level of melodrama but instead survives on the pure drama of an ordinary situation. It’s a family drama that is never schmaltzy, a character-driven film anchored by terrific performances from Dustin Hoffman and Meryl Streep.

Kramer vs. Kramer is the story of a failed marriage and its fallout. The husband is Ted Kramer (Hoffman), an ad exec whose life is all work until his wife Joanna (Streep) leaves him. Joanna goes away to find herself, leaving Ted to take care of their son, Billy (Justin Henry), by himself in a household that is at first chaotic, but eventually settles into a new routine. Though there is much anger in the house at first stemming from the fact that Ted’s work is suffering as a result of his increased responsibilities at home and from Billy missing his mother, father and son come to form a bond that allows them to create a new life together in Joanna’s absence.

Ted also forms a bond with Margaret (Jane Alexander), a neighbour who is also a single parent and who had encouraged Joanna to leave Ted if she wasn’t happy. As things begin to level out, Margaret sees the change in Ted and the way that he parents, but her attempt to express that falls on deaf ears when Joanna returns and fights Ted for custody of Billy. The battle quickly gets nasty as each gets torn to shreds by the other’s lawyer, eventually ending with Joanna being awarded custody. Since he doesn’t want Billy to have to testify, Ted decides not to appeal the decision and puts on a brave face for his son’s sake. However, when the day comes for Joanna to take Billy, she has a change of heart, realizing that he’s already where he belongs.

Kramer vs. Kramer proceeds in a very intelligent way and is incredibly in tune with its characters. There are moments of high drama – such as the fight between Ted and Billy over ice cream when Billy tells Ted that he hates him and a frustrated Ted replies, “I hate you back, you little shit!”; or the scene in which Billy falls off the jungle gym and Ted runs through traffic carrying him to get him to the hospital – but these moments are carefully calibrated so that they don’t reach the exaggerated level of melodrama. These scenes have such great impact because they feel so authentic and because the actors give such naturalistic performances. Hoffman won the first of his two Best Actor Oscars for this film and though Ted Kramer may not be as memorable a character as Ratso Rizzo, Dorothy Michaels, or Raymond Babbitt, it’s a testament to Hoffman’s skill as an actor that he can make this totally average guy dealing with average problems so compelling. Similarly, though Streep’s screen time is minimal, the impression she makes in this film is lasting. That final scene between their characters, when both have reached a point where they can and do put Billy first, is really extraordinary.

Kramer vs. Kramer is an interesting film not only for the strength of its performances, but also because it was made at a time when cultural notions about gender and parenting were shifting. The film reflects both the traditional line of thinking about the mother as the natural nurturer by having Joanna win the custody battle, but it also very effectively challenges the idea that the father can’t be the nurturer through its exploration of Ted and Billy's relationship. It takes this subject very seriously and it explores it in a full and ultimately very balanced way. If you’ve never seen Kramer vs. Kramer, I highly recommend it because it still holds up really well.