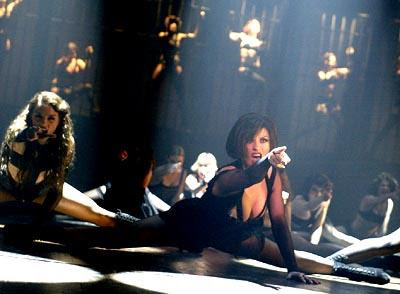 I know that to a certain contingent Chicago is, like, the worst Best Picture winner of the last 10 years, but I am one of those people who absolutely adores it. It's fun, it's beautiful, and the soundtrack is excellent. I wouldn't say that it's a perfect movie, mind you, but it's never failed to entertain me and I've seen it plenty of times. Plus, it made me understand my dad's affection for Catherine Zeta-Jones, whose charms had been entirely lost on me prior to this film.

Adapted from the enormously successful stage musical of the same name, Chicago is set in the late 1920s and follows the swift rise and even swifter fall of wanna be star Roxie Hart (Renee Zellweger). After discovering that the guy she's been sleeping with in order to advance her career only told her he'd help advance her career so she'd sleep with him, she shoots and kills him and is sent to Cook County Jail to await trial. Her idol Velma Kelly (Zeta-Jones) is already there for having killed her husband and sister and more or less ignores Roxie until she starts getting headlines and the attention of Billy Flynn (Richard Gere), a highly skilled lawyer who puts everything into his cases as long as the publicity lasts.

Roxie becomes what she's always dreamed of being - a star - but achieves it through her notoriety rather than through any discernable talent (we the audience see her perform, but until the very end no live audience has the pleasure). She'd fit in just fine on the cover of any tabloid today. Along the way from crime to either punishment or freedom, she imagines the world as her stage, every scenario as a musical number. In her mind she just keeps getting bigger and bigger and is shocked to discover that when all is said and done, her celebrity is as disposable as yesterday's news. She gains her freedom, but at what price?

The film unfolds in a very tongue-in-cheek way that keeps the tone light and bouncy. It is ostensibly a commentary on our society's unhealthy relationship with scandal, though it is admittedly a fairly shallow commentary. The idea that the public's hunger for sensational headlines can make a hero of a criminal and thereby inspire more audacious crimes is touched on, but Chicago doesn't go very deep into the psychology of the relationship between the notorious figure and the public whose adoration can only ever be temporary and conditional. What the film does do is keep you entertained enough that none of that matters. It moves beautifully and though it doesn't entirely transcend its roots as a stage production, the way that the musical numbers are incorporated works well. The stage is in Roxie's head, these are her fantasies, and bringing us into her head like that creates an intimacy between the audience and the character that ultimately makes her relatable and rootable. There are many reasons why we shouldn't want Roxie to suceed (she did kill a guy), and yet that moment of triumph for her and Velma at the end just feels so right.

The cast is almost uniformly excellent. Zellweger is spunky and enjoyably devious in the Eve Harrington-esque role of Roxie, Zeta-Jones friggin owns every scene she's in, Queen Latifah makes for a great foil to both Zellweger and Zeta-Jones, and John C. Reilly, as Roxie's dim husband Amos, gets the film's only really sad number, "Mr. Cellophane," and sells the hell out of it. The only real problem I have with the movie is Gere who, while appropriately smarmy, sings like he has marbles in his mouth, which I find really distracting. It's not enough to kill my love for the movie but it definitely interrupts my enjoyment of it.