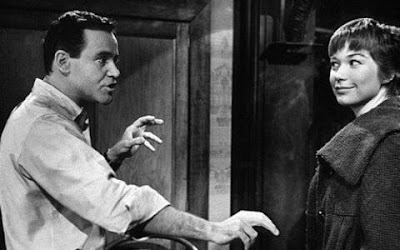 The Apartment is perhaps the most melancholy comedy ever made. It is about lonely people, misused by those around them, clinging to the things that they think will make them happy, only to end up even more disillusioned than they were before. For Baxter (Jack Lemmon), the light at the end of the tunnel is the promise of a promotion in his future. All he has to do is keep letting the executives in his office use his apartment to meet their mistresses. Meanwhile Fran (Shirley MacLaine) is kept going by her affair with the boss, Sheldrake (Fred MacMurray), and his constant promises that he’ll leave his wife… just as soon as the time is right. That Baxter and Fran belong together is something that he can see immediately, but something she doesn’t realize until it’s almost too late.

The Apartment is a romantic comedy in which Baxter and Fran stumble towards each other through various misunderstandings and past a series of romantic entanglements. It’s also a drama about the need for human beings to connect to each other (“I used to live like Robinson Crusoe,” Baxter tells Fran, “I mean, shipwrecked among eight million people. And then one day I saw a footprint in the sand and there you were”). And, finally, it’s a satire of big businesses and the men who run them. The men depicted in this film seem to be suspended in a state of arrested development, so obsessed with sex, and how to get it, and how to get more of it, that everything else in their lives is secondary. Even the sex itself is, in a way, secondary because it isn’t really the act that drives them, but the status they derive from running around with multiple women. They’re trapped in an endless game, little boys looking to dominate the world by having the most toys.

In the beginning Baxter sits at his desk in the middle of a sea of desks that look exactly the same and men who look just like him. These aren’t individual people, but a mass of parts in a machine. Baxter, however, has an edge on the other drones because he’s the go-to-guy for middle management. They call him “Buddy Boy” and promise to help him move up the ladder in exchange for him allowing them to borrow his apartment. Baxter keeps the appointments in a note book and keeps his place stocked with the liquor and food that the execs and their mistresses like. Sometimes they show up unexpectedly and Baxter is forced out of his own apartment and has to wait outside in the snow for them to finish so that he can go back upstairs and go back to bed. Because of all the activity (some of it noisy), his neighbours think he’s some kind of sex fiend. The doctor (Jack Krushen) who lives next door warns him that he won’t be able to keep up this pace much longer if he intends to live a long life. The scenes involving the doctor's reactions to Baxter's romantic entanglements are some of my favourite, never ceasing to make me laugh ("Mildred, he's at it again!" he exclaims upon hearing music from Baxter's place).

Baxter eventually gets the promised promotion and his new place in the world is symbolized by his receiving the key to the executive washroom, the ultimate status symbol. He wants to share his happiness with Fran, but finds out that not only has she been having an affair with Sheldrake, but that they’re two of the people who’ve been using his apartment. On Christmas Eve, Fran and Sheldrake meet at the apartment and he backs out of his latest promise to leave his wife. Later, and still at the apartment, she attempts suicide and Baxter finds her. The neighbours think she’s tried to kill herself because of Baxter and treat him accordingly, as does Fran’s brother-in-law, who gives Baxter a beating. Baxter, ever the gentleman, keeps the actual circumstances to himself in order to protect Fran, and she begins to realize how much she really does like him. Baxter, too, has a revelation when he sees that Sheldrake isn’t taking the situation with Fran seriously, brushing Baxter off when he tries to convince him to come and see her. Later, as a reward for keeping the truth about the situation to himself, Sheldrake offers Baxter another promotion, which Baxter turns down, not wanting to become the kind of man that social climbing makes you. This scene is played marvellously by both Lemmon and MacMurray with Baxter finally, and conclusively, standing up for himself and Sheldrake showing just how slimy he really is.

The next time Baxter and Fran meet, he’s in the process of packing up his stuff, getting ready to start his life over somewhere else, anywhere else. Fran, too, is ready to start over. There’s no great love scene, no big speeches or professions of love. Instead, they sit down to play cards, the way they did when she was staying at his place, recovering from the suicide attempt. He tells her he loves her. She looks at him. “Shut up and deal.” The ending is often the most delicate part of a movie - a bad one can drag a great film down to just being good; a good one can make a bad movie worth watching - and Billy Wilder had a knack for them, as demonstrated by this film, Some Like It Hot, Sunset Boulevard and Double Indemnity. The two lonely people connect - and it isn't schmaltzy or tacked on or unearned. It's a very genuine, very real ending that's perfectly suited to the story that unfolded before it.