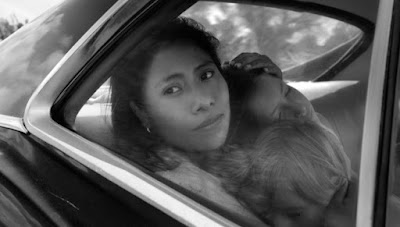 Alfonso Cuaron's last film, 2013's Gravity, was a cinematic experience that captured the vastness of space while telling what is, ultimately, an intimate story about a woman working through her grief. His latest film, Roma, is a story told on a small scale that suggests the great, wide world going on around it (and, while Gravity was a film that practically demanded to be seen on as big a screen as possible, Roma, which has been released in theaters and Netflix simultaneously, is intimate enough that it's impact isn't lessened by watching in on a smaller screen). Though he's made only five films in the last seventeen years including this one (the others being Y Tu Mama Tambien, Harry Potter and the Prisoner of Azkaban, Children of Men, and Gravity), Cuaron is one of the most reliably great filmmakers working today and Roma makes a strong case for being his best film to date.

Set in 1970/71, Roma unfolds over the course of a year (or so) while following Cleo (Yalitza Aparicio), one of the maids in the household of a doctor (Fernando Grediaga) and his wife, Sofia (Marina de Tavira). Though we see their conflict only peripherally, played out in clipped exchanges that occur in passing, overheard in the close confines of a household, it quickly becomes apparent that the marriage is coming apart and soon enough the doctor has disappeared from the picture, supposedly gone away to a conference, while Sofia tries to keep up the pretense that everything is fine, not wanting their four children to know that he's not coming back and still holding out hope that he's going to return to the marriage. This strategy of playing out one story just to the side of another (an art that Cuaron perfected as far back as Y Tu Mama Tambien) is deployed to tell both the intimate story of the household and the wider story of the political situation in Mexico at the time. Inside the house is a story of a family falling into chaos. Outside, a country is doing the same.

Like the failing marriage of the doctor and his wife, the political upheaval of the Mexican Dirty War encroaches on Cleo's life just enough to turn it in ways that she can't anticipate, but not so much as to begin to define it. The problems of the rest of the world swirl around her, with the sweeping long shots of Cuaron's camera (in addition to writing, directing, and producing, he also takes on cinematography duties and shares the editing credit with Adam Gough) speeding past people on the street to show the brief intersections of Cleo's life with those of others, but the story itself never belongs to anyone but Cleo, even if she's positioned to the side of most of it rather than central to it. The marital difficulties of her employers is largely characterized as Cleo's story, experienced from the outside, with Sofia's anger at her husband, which she cannot directly express because she's trying to keep it under wraps, finding an outlet in Cleo, who is admonished for everything from not cleaning up after the dog to just being there to witness something that Sofia didn't want her to witness. When she learns that she's pregnant, Cleo can only presume that it's going to be more of the same.

Sofia surprises her by treating her with kindness, perhaps seeing the similarity in their situations (she has been abandoned by her husband, who soon stops sending money because he's spending it all on new hobbies that he's sharing with his girlfriend; Cleo has been abandoned by the father of her child, who completely disavows knowledge of her when she tries to seek his help), but Cleo's situation is nevertheless a precarious one, pregnant or not. In the house she is at times treated with affection as though she's part of the family, but even in those moments her place in the household's hierarchy is always quickly reasserted the second anything needs to be done. She's one of them when it costs them nothing to include her - letting her sit down to watch TV with them, for example - but they don't hesitate to put her back to work as soon as they have needs that need to be tended to and when she's out of their company she's not even accorded the privilege of electricity, performing her evening exercises by candlelight because Sofia doesn't want her keeping a light on at such a late hour. She is, at least, treated much better than the poor dog, for whom the garage (so narrow that the doctor has to perform a very precise calculation in order to pull his monstrously wide car into the space) is as close as he ever gets to being outside.

Roma flows slowly, but it's never boring. Aparicio is captivating as Cleo, who is so accustomed to putting herself second that the performance is, by necessity, quite restrained and quiet, until the one moment when she breaks and says exactly what she's feeling. She's the glue that holds the film together and Cuaron shapes an easy rhythm to the highs and lows, the joys and the tragedies, of her day to day life. de Tavira is also excellent as Sofia, who could easily be the star of her own story as a woman bearing the consequences of her husband's midlife crisis who slowly comes to realize that she doesn't, in fact, need him and may even be better off without him. Roma is a beautiful film about how these two women find the strength to carry on, about how life itself goes on even when it seems like it's the end of the world. Finding the universal in the specific, the epic scope in the intimate portrait, this is Cuaron at his best.
Posted by Norma Desmond at 1:06 PM