The Performances: Mark Ruffalo in The Kids Are All Right 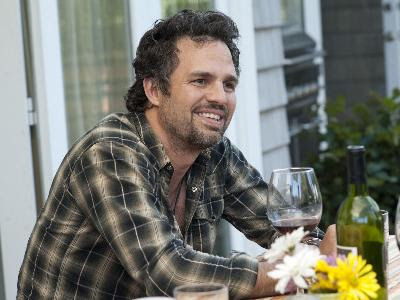 Since breaking out in 2000 with his performance in You Can Count On Me Mark Ruffalo has been steadily building his reputation as an actor, taking on major roles in films like Shutter Island and Zodiac, but also showing up in bit parts in films like Date Night and Where The Wild Things Are. He's a hard actor to pin down in that you never fully know what to expect from him, but you do know that whatever the role, he's going to slip into it seamlessly. So it is in The Kids Are All Right, where he plays such a laid back guy that you might almost forget that his character is the catalyst for a family crisis.

Paul is an easy going guy who just sort of drifts through life. People like him, he likes people, life is good. When Joni calls him and informs him that her mothers used his sperm to conceive both herself and her brother, Laser, and expresses an interest to meet him, Paul takes it in good natured stride. They want to meet? Sure, why not? It's all good. His casual charm wins over Joni and Jules but rankles Nic, who sees him as a threat to her family. Her antagonism only inspires him to shrug; no matter what happens, he'll just keep on keeping on.

But, beneath that cool facade lies some darker undercurrents. Paul has proceeded through life having forged connections which are only temporary because when things start to get heavy, he disappears. At the beginning of the film he's casually dating one of the waitresses in his restaurant, breaking things off after he gets involves with Jules. When their affair comes to light, he expresses an interest in making a go of it with her, a notion she reacts to as if it is preposterous. On the surface Paul's pursuit of Jules appears to be a movement towards something, but on inspection it's really just another form of running away. The waitress is available and she wants him, but that also means that she wants something from him, that he'll have to stand and deliver. He gravitates towards Jules because she's unavailable, because, on some level, he knows that she isn't going to call his bluff and that he'll be off the hook. There is a moment at the end of the film, when he looks through the window of Jules and Nic's house and looks so forlorn, so needy, that you truly feel bad for him because it isn't that he doesn't want to make meaningful connections; it's that he doesn't have the ability to follow through and sustain them.

Ruffalo reveals Paul to us slowly, unravelling him over the course of the film as the situation because more fraught with tension. He is not a bad guy, just someone who is very lost and perhaps doesn't recognize what he's doing or why it is going to blow up in his face. This is Ruffalo's first Oscar nomination, which can probably be accounted for by the fact that he always makes it look so easy that you take him for granted. Hopefully now that the Academy has seen fit to recognize his skill once, they'll recognize it more often in the future because Ruffalo is nothing if not consistent.

Wow...now that´s how you bash a charactr. But 1. The black chick from the restaurant who tells him to go fu<k himself,clearly was just a screwbuddy,something you or we are to percieve as running away when things get serious.Hmm...

A man who is not in a relationship or looking to settle down=childish and immature.In your eyes. 2.When the "lesbian" make advancements towards the straight guy(don´t underestimate this effect on the male),it will lead to him for once getting emotions,the charmer gets charmed.To even twist wanting to break up a family to be with it into ALSO running away might be over the top,hard to aprove.It´s selfish though. His real flaw becomes underestemating the severity of the situation,his role,his actions and taking Carefree to new levels.

By the end,he finally takes responsibility,not the kind that is voluntary or selfserving but a lifelesson. Both Paul and Ruffalo are disposed of like garbage by both the family and director and with 25 min. left in the film,we wonder where he goes and how he will cope.But as the door slams in his face,he is gone to never be seen again. Ends up slightly anti-male.