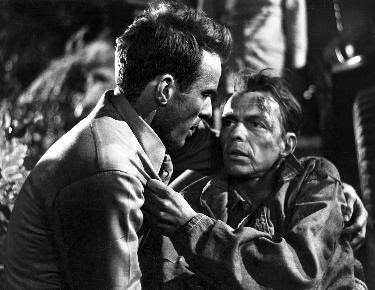 This post was contributed by Marshall Shaffner, who writes under the banner of Marshall and the Movies. Go on over and check out his Oscar coverage as well as his reviews.

It's easy to see why a movie like From Here to Eternity could take the Oscars by storm back in 1953. In the midst of a post-war baby boom, patriotism was still running high after our victory in World War II and tensions with the USSR were at a simmer, not a boil. We had yet to be mired in the Vietnam War or have our nation's highest office be tainted by the Watergate scandal. It was a different world, and movies fictionalizing these times have a mentality that reflects the times.

So when I watched the movie in an attempt to understand why it won Best Picture, I had to move myself out of our current times where last year's winner, The Hurt Locker, conveys a stark pessimism about military maneuvers. So while I might see the movie as an excessively romanticized portrait of the American soldier, they saw it as a rousing tribute to the men who served their country with honor and courage. And while I might see the movie's characters and plot as being a touch over-melodramatic, audiences were totally won over by their personification of military values. (This is not meant as a criticism of older generations, more a generalization of how audiences have changed over the decades.)

The movie follows two storylines: the tenacious Private Robert E. Lee Prewitt (Montgomery Clift) transfers to Hawaii after missing out on an unfair promotion. He was once a prized boxer and finds himself being hazed by his comrades to join their ranks, authorized from high-ranking officers. To cope, he befriends Maggio (Frank Sinatra) and romances Lorene (Donna Reed). Meanwhile, his superior, First Sgt. Milton Warden (Burt Lancaster), begins an affair with the captain's wife (Deborah Kerr) that gave us one of the most iconic love scenes ever shot. So iconic, in fact, that it had to parodied in Shrek 2.

I'd be lying if I said I loved From Here to Eternity. While it might capture the isolation of the soldiers in Hawaii and their humdrum routine existence at times, it felt like a more idealized portrait of military stereotypes. It's an interesting story (one good enough to be repeated a few times), but aside from Prewitt's erratic personality, I didn't find myself engaged in the characters at all. This is a very different kind of American war movie than is being made nowadays - chalk it up to generational differences.

The booki s extremely strange. Can't put my finger on why but I stuggled to read its 800 pages. So maybe the temper of the book has been picked up in the film?
I haven't seent he film and want to. Terence Malik of course made the second book into a film, The Thin Red Line, and that was somthing of a strange film to. The book certainly is.