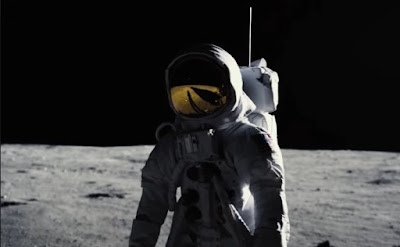 With First Man Damien Chazelle tells the epic story of the moon landing on a deeply intimate scale. At times it feels more like a domestic drama about a family suffocating under the weight of grief both real and anticipated than a retelling of the dangerous work of figuring out how to send human beings off of earth and onto another astronomical body and then bring them back - though, make no mistake, the film is nevertheless invested in showing the painstaking process of trial and error that resulted in NASA's triumph. Anchored by a great performance from Ryan Gosling as Neil Armstrong, with the supporting ranks full of solid performances themselves, First Man is a thoughtful, sometimes even powerful, film about one of the defining events not only of the 20th century, but of human history itself.

The emotional axis on which the narrative turns is the impact of the death of Armstrong's daughter, Karen, who succumbs to brain cancer in 1962 at the age of two. As the film opens, Karen is still undergoing treatment and Armstrong is shown keeping detailed log books about every aspect of her treatment and symptoms, as though he might be able to "solve" her illness as if it were a math problem. After Karen's death the family moves to Houston so that Armstrong can participate in Project Gemini, with his wife, Janet (Claire Foy), hopefully stating that it will be a "fresh start." However, it's difficult to move forward from trauma without actually dealing with it first, and Karen's death is like a specter chasing Armstrong deeper and deeper inside himself. As the goal of getting a man to the moon comes closer and closer to becoming a reality - happening at speed because the Soviets keep reaching milestones first - and men who are in the program with him begin to lose their lives in the pursuit, death becomes an inescapable part of Armstrong's daily life. Each time a friend and colleague dies, the pain of losing his daughter comes back to him and the reality that his life may be the next one lost becomes into sharper and sharper relief.

The story is told in two distinct spheres. One is the workplace where Armstrong and his colleagues work diligently to solve the problems presented by trying to get a man to the moon and back, and who bravely put their lives on the line in test after test as NASA tackles one aspect of the problem after another. When Chazelle depicts these men in their various crafts, the metal rattling as if it might come apart at any moment, seeming as though it's held together by little more than prayers, the thin line between success and failure is driven home with clarity. Neil Armstrong and Buzz Aldrin (played by Corey Stoll and depicted here as the sort of boorish loud mouth who claims to say the things that every one else is only thinking) made it to the moon and back, but there were never any guarantees. Any number of things could have gone wrong at any number of points throughout the mission and though we the audience have the benefit of knowing how this turns out, Chazelle is still able to ratchet up the tension and highlight how non-existent that margin for error really was.

The other sphere is the Armstrong home, where Armstrong is depicted as being in perpetual retreat from emotional attachment. The pain he feels over Karen's death is his alone, shared with no one - including Janet, the one person who would truly understand it. Although there are moments of happiness in the Armstrong household where he's shown playing with his two sons and joking with Janet, the closer the film gets to the Apollo 11 mission the more isolated Armstrong becomes, distancing himself from his family. So reluctant is he to engage emotionally that he's shown packing up to leave home before the launch, having apparently planned on leaving without saying goodbye to his sons or acknowledging to them that they may never see him again. This is a bridge too far for Janet, who up until this point has quietly accepted that the emotional labor of the family will be her burden alone, but refuses to accept the extraordinary responsibility of having to tell their kids that their dad has gone to the moon without saying a word to them about it. The role of the concerned wife is, generally speaking, a thankless one. That's as true in this film as in most, though Chazelle and screenwriter Josh Singer try to emphasize how vital Janet's role is as part of the family unit and how little acknowledgement she gets for it, but this scene alone is so powerful that it's little wonder why Foy was drawn to the role.

When Janet finally does force her husband to talk to their children about what he's going to do, he does it with the matter of factness of a press conference, acknowledging in the face of his eldest son's questions that he may never return, but betraying nothing about how he feels about that and saying none of the things he might be expected to want to say just in case he never comes back to say it later on. As told by Chazelle, First Man is a film about the first moon landing, but it's equally a film about the loneliness of grief in a society that demands that men be restrained in their emotions. For that reason alone I'm somewhat baffled by critics who read this movie as a right wing longing for the "good old days." There's nothing particularly commendable about societal notions of masculinity being so limited that a man can only cry over the death of his daughter when he's alone in a room and bristles at the mere mention of her death lest he betray that he feels anything other than anger, and the film doesn't depict this as being in any way aspirational. The quiet final scene reiterates this with Armstrong, having experienced the different perspective that he speaks of space offering early in the film, making a simple gesture to express an emotion. He and Janet are literally separated by glass when he does it, but the way that Chazelle films it turns it into a moment of deep intimacy as her reflection on the glass combines with his image. In that moment he finally lets her in - all he had to do to get to that place was leave the planet.
Posted by Norma Desmond at 8:00 AM

I really loved this movie far more than I expected. I do get some of the criticisms but I really liked how it took a different approach to doing a biopic.