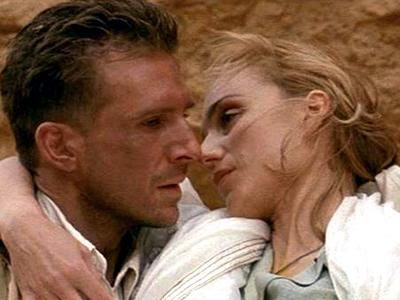 Though I am an ardent fan of Fargo, I must admit that I have a soft spot for The English Patient. It’s just so grand, so beautiful, so epic in every way. It boasts terrific production values, a compelling story, and great performances. It is the perfect movie of its type and would be a great Best Picture winner were it not for the pesky fact that it beat what is arguably the best Coen brothers film to date. As it is, by besting Fargo, it has a rather qualified legacy.

The English Patient begins at the end, with a critically burned man known as “the English patient” who is being nursed by Hana (Juliette Binoche) in an abandoned monastery. Reluctant at first, he slowly opens up to her and tells her his story, revealing that he’s Count Laszlo de Almasy (Ralph Fiennes), a Hungarian geographer. Before the onset of World War II, Laszlo and his partner Madox (Julian Wadham) were making a map of the Sahara Desert when they came into contact with Geoffrey and Katherine Clifton (Colin Firth and Kristin Scott Thomas). With Geoffrey frequently absent, Laszlo and Katherine fell in love and into a passionate affair, which ultimately led to tragedy when discovered by Geoffrey. Laszlo survived - in body if not in soul - but Katherine died a slow and agonizing death, one which continues to haunt Laszlo.

In the present day timeline, Laszlo and Hanna are joined by a mysterious man named Caravaggio (Willem Dafoe), who lost his thumbs to the Nazis and believes that Laszlo was part of a spy ring and killed the Cliftons. Meanwhile, Hanna begins a tentative romance with Kip (Naveen Andrews), a British-Indian soldier, with whom she is at first reluctant to get involved, having already lost one man during the war. As the story moves towards its conclusion (and the war towards its end), Caravaggio’s desire for vengeance subsides and Hanna’s sense of hope is renewed.

Directed and adapted by Anthony Minghella from the novel of the same name by Michael Ondaatje, The English Patient moves gracefully between time periods and storylines. The story exists on both a large and a more intimate level, combining an epic sweep with a great attention to character. The relationship between Laszlo and Katherine takes up the bulk of the story and is, in my opinion, one of the more compelling and engrossing cinematic love stories of the last 15 years; made so both because of the care that Minghella takes in drawing the characters and their relationship, and because of the performances by Fiennes and Scott Thomas. Both received Oscar nominations (rather inexplicably, neither has received a nomination since) and they bring depth to the characters and their relationship that is complemented by the lush sensuality that Minghella brings to his direction.

The supporting cast fares just as well, led by the always luminous Binoche, who won the Best Supporting Actress prize for this performance. She’s terrific here – but, then again, she’s always great. Her Hanna is a gentle and surprisingly fragile soul, someone who can be a source of strength for others but hides an intense vulnerability in herself. Her very cautious relationship with Kip is just as compelling as that between Laszlo and Katherine, just on a smaller scale, and Mingella expends just as much care in exploring it as he does with the main story.

The English Patient is a great film. It is not as great as Fargo (how many movies are?), but it is a beautifully made film that excels at every level. Its reputation has been somewhat damaged by the comparison and the inevitable “the Academy got it wrong” conversation that is inspired by just about every movie the Academy names Best Picture. A better movie was nominated that year, but that doesn’t mean that The English Patient had no business being nominated at all. It’s a great film, very moving, very well constructed, and it holds up very well.