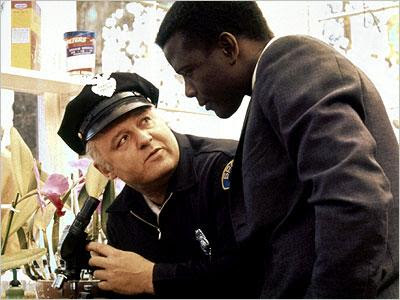 This post was contributed by film student and film journalist Lyz Reblin. Check out her blog Online Film School at your earliest opportunity - you won't regret it!

In the Heat of the Night takes place in Sparta, Mississippi. Virgil Tibbs, a police officer from Philadelphia, just happens to be waiting for his train ride home when a murder takes place in town. After being brought in as a suspect, Officer Tibbs becomes a resource (even if an unwanted one) for Chief of Police Gillespie. But will both of their feelings of racism cloud their judgment in finding the killer?

Now In the Heat of the Night was nominated for eight Academy Awards, winning six. I’ve already said that I think it was unworthy of winning Best Picture, though deserving of the nomination. How Hal Ashby could win for best film editing in the same year of Bonnie and Clyde (which wasn’t even nominated) is remarkable in my mind. As for best adaptation, I have never read any of the source materials for any of the nominees, but as a picture I still prefer The Graduate.

I do, however, agree with two of the Oscars it took that night. Best sound is actually tied into Best Actor in this case, which may sound odd but let me explain. Rod Steiger as Gillespie had a tendency to constantly be smacking gum. The sound of his loud chewing added flair to his character and whatever scene he was in. Whether this was a choice of the director or actor (I’m leaning towards actor) it was one that revealed much about Gillespie. Whether or not he was masticating the gum, you could almost tell his mood or what he was thinking. Of course, this makes me wonder why the film didn’t win for Best Sound Effects, but that’s a whole different matter.

For those who haven’t seen the film, one may be confused why Rod Steiger is considered the leading role, instead of supporting. Usually, I denote leading actors as the catalyst of a film, those that keep the momentum going. Both Sidney Poitier and Rod Steiger’s characters do this. It is their chemistry and conflict that moves the film along. Therefore, in a different time, both Poitier AND Steiger would have been nominated for Best Actor in a Leading Role. As to who would have won, I still would go with Steiger. Poitier has an outstanding presence, which cannot be overlooked. But Gillespie is a much more complicated character to my mind, and the one that goes through the most change in the film.

Though I feel the film is undeserving in some of its accolades, I am still glad I got around to watching In the Heat of the Night. Undeserving of awards does not make it a bad film; it merely means that I felt some films were better in certain aspects.