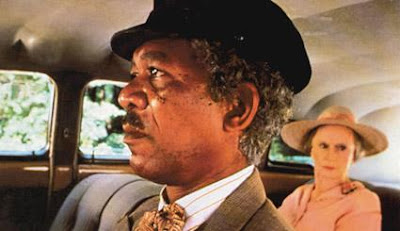 Driving Miss Daisy is one of the kindest and gentlest films ever to win Best Picture. Based on a play of the same name by Alfred Uhry, this story of an elderly Jewish woman and her black chauffeur has got to be one of the most unlikely hits of the last 25 years. But it obviously struck a chord as both its box office and the fact that it managed to win Best Picture without director Bruce Beresford gaining a nomination (a feat matched only by Wings and Grand Hotel) indicates. As the tagline explains, it’s “the funny, touching and totally irresistible story of a working relationship that became a 25-year friendship.”

The story begins in 1948 when Boolie Werthan (Dan Aykroyd) informs his proudly self-sufficient mother, Daisy (Jessica Tandy), that she will have to hire a chauffeur because no insurance company will give her coverage due to a recent car accident. Boolie hires Hoke Colburn (Morgan Freeman), but Daisy refuses his services, opting to walk instead (while he drives behind her, trying to coax her into the car). Eventually she comes to accept that she needs Hoke’s help and thus begins in earnest their often difficult relationship. Hoke is never anything but patient and kind but Daisy, despite her manners and sense of propriety, can be rather blunt. For example, her response when she learns that Hoke can’t read is, “I taught some of the stupidest children God ever put on the face of this earth and all of them could read well enough to find a name on a tombstone.” There’s got to be a nicer way to say that, right?

Anyhow, things are going along well enough until Hoke drives Daisy to Mobile, Alabama and she begins to witness the prejudices he faces every day. She also begins to recognize for the first time that, being Jewish, she is subject to many of the same injustices, a fact which is driven home to her after her synagogue is bombed. Though the film gives careful and sensitive attention to the way that it deals with race, it is sort of unbelievable that Daisy could live for 80 or so years without ever having encountered anti-Semitism. I mean, this isn’t simply a matter of Daisy failing to recognize the parallels between the difficulties she faces in society and those faced by Hoke; but that she has literally been blind to it her entire life. It takes a bit of a leap to believe this but, at the same time, the characters have been so carefully drawn by Uhry (who adapted his play for the screen) that the leap isn’t impossible.

Both Freeman and Tilly would receive Oscar nominations for their roles here and Tilly would go on to win. There’s a sense in which, as good as Freeman is, he’s stuck in something of a thankless role. He’s the grounding force of the story, a character who is good and solid from beginning to end, but all the evolution belongs to Daisy. She’s the character who grows and changes as the story progresses, whereas Hoke simply needs to stay the course. Because of this Tilly gets more to work with, whereas Freeman is called upon to deliver a performance of magnificent steadiness, one that could easily be overlooked.

Tilly and Freeman work together very well. Their performances are very natural and each brings out facets of the other that helps make their relationship so complex. They have a lot of rough moments together – for example, when Daisy attempts to ask Hoke to accompany her to a dinner at which Martin Luther King, Jr. will be speaking by attempting to manipulate him into asking to go with her – but there is also a sweetness to their relationship, particularly towards the end. The film ends with Daisy declaring to Hoke that he’s her best friend. I don’t know that he necessarily feels quite the same way, but there’s an obvious affection there and I think that, ultimately, the film earns that. Driving Miss Daisy isn’t as flashy or groundbreaking as some of the films that have won Best Picture, but it’s a solidly entertaining film and very moving. As far as I’m concerned, it was a very deserving winner.