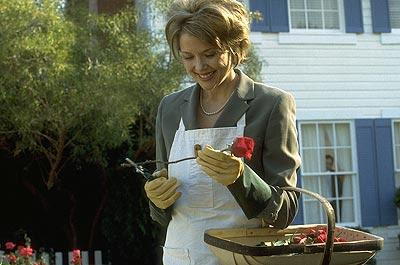 The cinematic landscape is no stranger to films exploring the dark, kinky underbelly of American suburbia. Sexual peccadilloes, marriages that are not what they seem, the corrupted “American dream” – these are themes so common that they’ve reached the point of cliché. And yet there is something about American Beauty that allows it to stand apart from its predecessors and imitators and which allows it to stand up after multiple viewings.

Lester Burnham (Kevin Spacey) is a man in turmoil. His life looks ideal from the outside: he has the nice house in the nice neighbourhood, the pretty wife and daughter, the comfortable uniformity shared with his neighbours; his life is the personification of middle-class success. He implores us, however, to “look closer.” Behind the respectable veneer is fraud and despair. He gets no respect from his wife Carolyn (Annette Bening) or their daughter Jane (Thora Birch), nor does he deserve any. His job is meaningless and his life is slowly ticking away into nothingness. He is (the film would have us believe) the average, miserable suburbanite.

Carolyn and Jane are miserable, too, though Carolyn is so adept at pretending to be happy and perfect that she’s nearly fooled herself into really believing it. While Lester has allowed himself to sink, Carolyn continues to reach, wanting to drag herself up to the next level even if it means sacrificing her humanity. She’s a real estate agent, supporting the family by selling others on the fantasy of life in the suburbs, and the toll that her job takes on her is extreme. In one scene she brutally berates herself for her failure to sell a house, her feelings of low self-worth channelled into a drive to sell, to succeed, to live up to that picture of perfection she’s pushing so hard.

Things begin to change when Lester meets Angela (Mena Suvari), a cheerleader and friend to Jane. In a scene that has since been much parodied, Lester watches as a group cheerleading routine dissolves into a private dance from Angela, who opens her uniform to shower him with rose petals. Lester is a changed man, his morose bearing suddenly replaced by an eagerness to live, to savour and enjoy the best that life has to offer. He gets into shape, he regains his self-esteem, he quits his job – he becomes the man that he has always wanted to be but was too scared to become.

Lester’s transformation has repercussions that affect all in his vicinity. In declaring his own ordinariness and that of those around him to be insufficient, he not only strips away the facade behind which he had been hiding, but he exposes all those around him as frauds. In rejecting Carolyn’s idea of perfection, he destabilizes her conception of herself. In refusing to play by the implicit suburban rules, he disrupts the lives of his neighbours, such as the Fitts family next door. Lester becomes a dangerous figure because he becomes the bearer of truth in the midst of people who feel safe only when ensconced in falseness.

All of this unfolds with the aid of a smart, darkly funny screenplay from Alan Ball. The crispness of the script, played out by a cast of actors at the top of their game, is what gives American Beauty its edge over other films like it. However, despite its many strengths, American Beauty is still problematic in its depiction of gender, skewing towards the ultra-traditional and anti-feminist in its narrative progression. The film opens with a wife who not only works but is a more successful provider than her husband and clearly puts her career before her family. Her husband is emasculated, her family is in tatters. As the husband regains control and self-esteem, the wife begins to flail. The ease with which the husband regains dominance in the relationship shows that the wife’s power was never more than illusory – she was in control because her husband could not rouse himself to stop her, but once he wants control back, she proves to be powerless against him. Further, once the balance begins to weigh more clearly in favour of the husband than the wife, the household becomes demonstrably happier. Much of the film’s dark humour comes at the expense of the wife, her desire to climb the social and professional ranks, and her inability to keep up once her husband begins to reassert himself. Though the film ostensibly stands against the complacency of traditional family values, it does in fact reinforce the most conservative gender politics.

Films like this one tend to have a short shelf-life because the things they depict are so firmly grounded in a specific time and place - a specific moment in cultural evolution - that they don’t move along with shifts in the zeitgeist. American Beauty, however, is so perfectly put together that it has somehow maintained its freshness a decade after its release. The message it imparts – be happy rather than complacent, look beneath the surface rather than at it, don’t let other people tell you what you want – remains powerful and relevant and the finesse with which that message is imparted remains just as impressive today as it was in 1999. American Beauty is a film that stands the test of time and one can imagine that 10 years from now it will still be a movie worth talking about.

Oh what a great choice!!.. This is one of my absolutely favourite films of all time!I don't know how how many times I have watched it.
Your review is right on the money, in many respects it is a film that will age well because in essence people don't change, the times do but not humanity as a whole.
Love the point also of film being a snapshot into different eras. This is one of my most fundamental loves of cinema where you can watch a film from say the 30's and get a picture of the times.
I have just done a review on my blog on 3 godfathers and I make his point myself.
A grat blog!