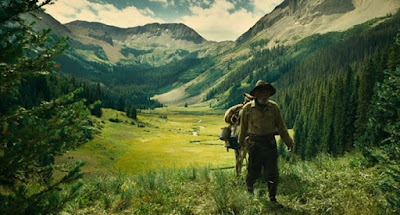 Ever since Netflix began acquiring and developing its own library of films the Academy of Motion Pictures Arts and Sciences has, with the exception of Netflix's documentaries, resisted recognizing Netflix pictures as legitimate, award worthy content. This changed last year when Mudbound broke through to get 4 nominations and one imagines that this year, with the release of Roma, already so thoroughly lauded with awards from critics, and with filmmakers like the Coen brothers turning to the platform with their latest, the notion that films released through Netflix aren't "real" movies will be obliterated. The Coen's latest, The Ballad of Buster Scruggs is a great challenge to the idea that Netflix removes the "cinema" from films, as it is a thoroughly cinematic piece of work even when viewed on a small screen thanks to the sumptuous compositions of cinematographer Bruno Delbonnel, who previously lensed the Coen's Inside Lleweyn Davis. Telling a series of tales set in the old west, Buster Scruggs hearkens back a time when the Western was as big as all outdoors while being told in the wry, modern voice of the Coens.

The film is built around a framing device of a series of short stories being read from a book, with an unseen reader literally turning the page between the end of one story and the beginning of the next to transition between narratives. The first two stories - the darkly funny and very winning tale of the titular Buster Scruggs (Tim Blake Nelson), an outlaw whose cheerful demeanor belies just how deadly he is, and the story of a would-be bank robber (James Franco) who catches exactly one break amid a series of (self-created) misfortunes - might lull you into thinking that this is going to be a comedy. A violent comedy in which a character causes a man to shoot himself in the head three times and then sings a rollicking song about it, but a comedy nonetheless. Instead the comedy somewhat abruptly falls away by the third story, in which a traveling impresario (Liam Neeson) begins to consider whether his current act has run its course, and from that point the tales become longer and more dramatic, though there's something of a return to comedy with the last story, in which five people travel together in a stagecoach without being altogether at ease in each other's company.

As in any anthology film, some stories work better than others. The first, "The Ballad of Buster Scruggs," is very engaging and contains Delbonnel's most playful and inventive work through the film (I particularly enjoyed the shot where Scruggs steps into a saloon and pats the dust from himself, walking away and leaving in his wake a ghostly outline that hangs in the air for a minute before dissolving) while the second story, "Near Algodones," is funny but has an unfinished feeling to it. Of the three dramas that follow, the best is "All Gold Canyon," based on a story by Jack London, in which a prospector (Tom Waits) dedicates himself to digging up a quiet valley in search of a pocket of gold he knows to be hidden within it, only to have his bounty threatened the moment he finally finds it. The climax of the story is a masterclass in tension and patience which shows the Coens at the top of their game.

For the most part, The Ballad of Buster Scruggs is an easy sit. It's neither the best nor the most challenging film the Coens have ever made, but it works very well for the sort of low stakes and relaxed piece of work that it is. It's disappointing, however, that for all the things that can be said to the film's credit, it takes such a dim, incurious, and limited view of Native Americans, who appear briefly in "Near Algodones" and "The Gal Who Got Rattled," a story about a woman (Zoe Kazan) who finds her fortunes changing as she travels to Oregon as part of a wagon train, and are used merely for "flavor." They are the physical embodiment of danger, whooping while ambushing unsuspecting white people, killing them and taking their scalps. It's a depiction that wouldn't be out of place in a film made a hundred years ago - which may be the point, the film is built around the idea that these are stories coming out of an old book of tales of the west told from the perspective of white people and playing to the prejudices and assumptions of a prospective white audience, but the Coens may go a bit too far in making that point. The Native Americans are caricatured in a way that feels extreme even when you take into account the context in which these stories are being told and the wider view taken by the film as a whole and the Coen's ironic approach.

That approach involves an explicit surface and the implicit meaning lurking just beneath the text. In those two stories the Native Americans are explicitly dangerous, attacking with full force and without reason. Implicitly throughout the film, however, it's the white men who are settling the west who are being marked out as the real danger. Buster Scruggs kills at least half a dozen men in his brief story. The bank robber is willing to kill to get what he wants and is faced with being killed on multiple occasions in the name of justice for things that he both is and isn't guilty of. The impressario would just as soon murder as care for another person depending on what will put money in his pocket. The woman on the Oregon trail makes a fatal decision out of fear because of what the wagon train's leader has told her the Native Americans would do to her if they were to capture her. The final story features a pair of bounty hunters (Brendan Gleeson and Jonjo O'Neill) who, though they have the option of bringing men in dead or alive, only ever choose the former. Even the prospector, who spends much of his story alone, comes into a pristine valley where everything in nature is living in harmony and begins tearing it up and throwing it into disarray even before gunshots start getting fired. There's blood all over all of the stories and all over the hands of the white men and women in them, but it's the violence of the Native Americans that stands out because, from the perspective of the storytellers, the trail of death that follows the white characters is just part of the business of manifest destiny, so commonplace that it's barely worth dwelling on - except perhaps to sing a song about it.
Posted by Norma Desmond at 8:00 AM