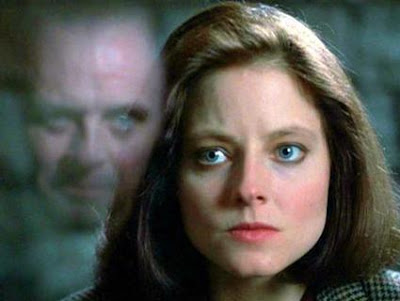 This post was contributed by Lyz Reblin, who also wrote the review of In The Heat of the Night. She's the brain behind the blog Online Film School.

At the Academy Awards, Silence of the Lambs took Best Picture, Best Leading Actor, Best Leading Actress, Best Director, and Best Adapted Screenplay. The only categories it lost in were technical, Best Editing and Best Sound. I do not always agree with the Academy, but for 1992 I do. I feel that Silence of the Lambs deserved all of their accolades (sort of) and the film was not the best in the categories it did not win.

I knew about the plot of Silence of the Lambs years before I saw it, especially the character of Buffalo Bill and his infamous lines. But even going into the film with such knowledge, did not prepare me for the horror.

Most of the horror comes from, no surprise, Anthony Hopkins’ portrayal of Hannibal Lector. He does not blink, just like Charles Manson. I recently watched Inside the Actors Studio featuring Jim Carrey, who discussed Hopkins’ process in creating the villainous character. Supposedly Hopkins took two animals, a tarantula and a reptile, and used their characteristics in his performance. Seeing as I have arachnophobia no wonder his performance scared me. However, I disagree with him getting the Best Leading Actor Oscar. Not that his performance wasn’t Oscar worthy, but for the fact that he is on screen for approximately fifteen minutes. I guess amongst all the other men in the film he is the lead, but his role could be argued as supporting and that there is no male lead.

This brings me to one of my favorite aspects of the film, the female lead. Jodie Foster is one of my favorite actresses, especially in Maverick. What is great about her character is the fact that there is vulnerability. There is a sense that she may not succeed because she is not your typical leading lady. Agent Starling is young and inexperienced, but smart and cunning as well. It’s a perfect balance in mind.

But none of these performances would be what they are without the screenplay. Based on the novel by Thomas Harris, Ted Tally’s script was hardly altered by director Jonathan Demme when production began. Maybe more studios should take note of this.

Silence of the Lambs is a classic, one of the few best picture films I feel that in years to come audiences will still agree with its winning the award. Anthony Hopkins performance has become iconic, yet people still get his lines wrong (it’s “good evening, Clarice” not “hello Clarice”). Whether you view it as a horror or a thriller, you can’t argue that it isn’t one of the most solid best picture winners of the past few decades.