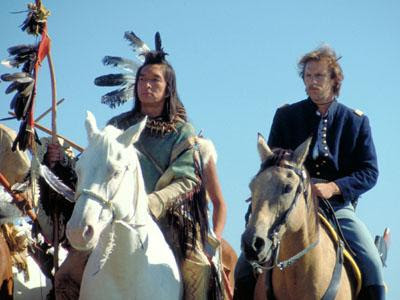 “I had never really known who John Dunbar was, perhaps because the name itself had no meaning. But, as I heard my Sioux name being called over and over, I knew for the first time who I really was.” Kevin Costner’s epic western Dances with Wolves is about one man’s journey of self discovery – or, alternately, it’s a continuation of the practice of white storytellers shamelessly co-opting another culture. I guess it depends on who you ask. Laying racial politics aside, however, it’s a very well-made film that holds up pretty well twenty years later.

The story centers on John Dunbar (Costner), an American military officer sent to a post at Fort Sedgwick in Colorado. On his arrival he finds the post abandoned but opts to stay on and man it by himself – a somewhat dangerous proposition given the post’s proximity to Sioux and Pawnee tribes. Dunbar has several encounters with the Sioux, who attempt to scare him off, and eventually he’s able to establish a relationship with them. This happens after he helps the injured Stands with a Fist (Mary McDonnell), a white woman who was raised in the tribe after being adopted by Kicking Bird (the always excellent Graham Greene) and Black Shawl (Tantoo Cardinal).

Dunbar eventually becomes integrated into the tribe, participating in a buffalo hunt, helping fight against the Pawnee, and falling in love with Stands with a Fist. He’s given the name “Dances with Wolves” after he’s observed playing with a wolf at Fort Sedgwick and he finally feels a sense of belonging that has always eluded him. However, by now the U.S. Army has re-occupied Fort Sedgwick and they capture Dunbar, attempting to force him to work for them as an interpreter. When he refuses he’s tried for treason and his imprisonment leads to the climactic battle between the army and the Sioux.

Dances with Wolves is a somewhat problematic film in that it’s one of those stories that is ostensibly about another culture, but only insofar as it is viewed through the eyes of a white protagonist who is coded as good by his ability to feel empathy for “the other.” There are two big reasons, I think, why films like this exist in such great number. The first is the assumption that films without big name stars aren’t marketable and most big name stars are white. The second is that if you don’t have a noble white protagonist who struggles and fights alongside the marginalized other, then all you’ve got are white characters as villains, which might alienate white audiences. This is irritating in that it means that people aren’t given the opportunity to tell their own stories (at least not with big budgets and marketing), but that doesn’t necessarily mean that these stories can’t be told well. Lawrence of Arabia and Out of Africa are examples of this kind of film done right and, ultimately, so is Dances with Wolves. I think that on the whole Costner and Michael Blake, who adapted the screenplay from his own novel, go to great lengths to show the Native American characters as human beings with qualities that are both good and bad, rather than as monolithic villains (which is how Native Americans were depicted in film for decades) or, at the other extreme, as angelic figures that are too good to be true.

Dances with Wolves was Costner’s debut as a director and he tells the story with great narrative sweep. It stands up against other epics as something that is at once larger than life as a story, but told with great care and control by the storyteller. This is a very well-made film, though I know its Best Picture win is a sore spot for many because it beat Martin Scorsese’s Goodfellas. While I’m inclined to agree that Scorsese’s film is superior as a work of art, I think that Dances with Wolves is far from being the most objectionable Best Picture choice AMPAS has ever made. It’s a good movie and one that is definitely worth revisiting.