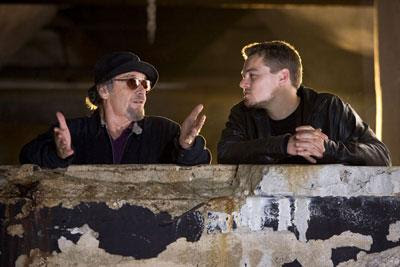 The Departed is the film that finally (finally!) won Martin Scorsese his long overdue Oscar for Best Director. Despite this, the film sometimes gets mentioned as one of his “lesser” projects – an attitude that I find ludicrous. The level of craft on display in this film belies the notion that this is anything less than a masterwork and to my mind The Departed deserves to be considered alongside Taxi Driver, Raging Bull and Goodfellas as one of Scorsese’s very best. To me, this film was a return to form for the director, whose previous two efforts (Gangs of New York and The Aviator) were bloated just a bit by too much self-indulgence. It is also one of the few films of which I can honestly say that the remake is better than the original.

The Departed begins with Jack Nicholson as mobster Frank Costello and if the opening doesn't remind you of Goodfellas then... you've never seen Goodfellas. However, while Goodfellas begins with the still star-struck narration of the protégée, The Departed begins with the weary narration of the mentor. Frank will take Colin Sullivan (Matt Damon) under his wing, grooming him to enter the police force and become his spy. Sullivan thrives, rising quickly through the ranks and passing on information to Frank so that he can stay one step ahead of the authorities.

While Colin is a bad guy pretending to be good, there's also a good guy pretending to be bad: Billy Costigan (Leonardo DiCaprio) is rising in a different fashion as a cop tapped to infiltrate the mob. Years pass as this cat-and-mouse game is played with Costigan supplying information to Queenan (Martin Sheen) and Dignam (Mark Wahlberg) and Sullivan keeping Costello apprised. Both organizations are aware that there's a leak and both Costigan and Sullivan are on edge, under constant threat that the delicate balance of their lives will tip and leave them exposed and in danger. The plot itself is quite delicate insofar as any element revealed too soon would destroy the tension that's been building, but writer William Monahan manages to maintain the balance, keeping the plot from toppling over on itself and also keeping it from growing too heavy. This is a film with a complex plot and a two and a half hour running time, but it clips along at a great pace and that's as much a credit to Monahan as to director Martin Scorsese or editor Thelma Schoonmaker.

DiCaprio and Damon carry the weight of the film and both are able to convey the desperation both men feel. These two characters are in a sense rudderless, their identities so flexible that even they don't always know who they are, but neither actor ever seems lost behind their masks. The performance by DiCaprio is especially moving as Costigan's knowledge that not only is his false identity under constant threat of exposure but that if something were to happen to Queenan and Dignam, he could lose his "real" identity as well, takes a heavy toll on him both physically and mentally. It's a performance which displays a great deal of vulnerability, which you don't often see or expect in this type of movie.

There are many other reasons to see this movie, from the inter-play between Wahlberg and Alec Baldwin (Wahlberg and anyone, actually), to the performance by Nicholson, to the almost comical way that cops keep turning out to be criminals and criminals keep turning out to be cops. It's a great movie, a genre film in the best sense: one that embraces the conventions of the genre but rises above the cliches.

Yeah, it's up there with Scorcese's most famous work. It's almost dismissed, even though it won the Oscar.

Departed might not make my Top 3 of Scorsese - that would be Taxi Driver, Raging Bull & Mean Streets. In fact, it might not even make the Top 5. But, having said that, it sure remains a compelling film.

And, more than anything else, I was elated when it finally won Marty an oscar for best direction; as they say, better late than never.

@Shubhajit: I still haven't seen Mean Streets. I obviously need to get on that.