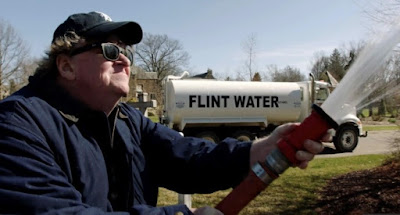 The first 10 minutes of Michael Moore's Fahrenheit 11/9 are brutal. Taking us back to the eve of the 2016 election, when for many of us it seemed inconceivable that a candidate who was openly racist, an admitted sexual assaulter, and who actively incited violence at his rallies could be elected President, the opening minutes of Fahrenheit 11/9 are awash in people gleeful at the prospect of a Democratic victory, having counted the chickens before they hatched. It's like seeing that two cars are about to collide and being utterly helpless to stop it. And in the end, it's far from the most upsetting thing in this documentary, a polemic that, despite the advertising's heavy focus on Trump, is not really focused on Trump specifically, but the political system that made his ascension to the United States' highest office possible. If you hate Michael Moore you aren't likely to be won over by this film, which is a shame because he makes a lot of solid points.

This is Moore's opening, that Trump, jealous of the fact that Gwen Stefani was making more to appear on The Voice than he was making to appear on The Apprentice, pretended that he was going to run for President as a means of getting NBC's attention and convincing them that he was so invaluable and so popular that they needed to give him a raise. This is utterly ridiculous. It's also probably true. However, instead of securing a raise, that press conference got him fired because of his racist rhetoric. From that point on, he was too racist to employ as an on camera personality on network television, but somehow not too racist to take the Presidency.

But, again, this isn't really about Trump, whom the film sees as a symptom and not the disease. The disease is a broken political system in which the majority of would-be voters are so disenfranchised and disenchanted that they aren't participants in what is, arguably, the most essential element of a democracy: voting. It's a system that values corporations over people to such an extent that when it became clear that the water from the Flint River was poisoning the people of Flint, Michigan (whose water source had previously been Lake Huron) the government, under the leadership of Michigan's Governor Rick Snyder, did nothing, but when it became clear that the Flint Water was corroding the products being manufactured in the General Motors Plant, it reopened the water pipeline coming from Lake Huron - for the General Motors Plant only.

Moore is from Flint and has been fairly heavily involved in activism around the Flint water crisis, so it's no surprise that the strongest parts of the film are the ones that deal with Flint. There's a special place in hell for Rick Snyder, who will hopefully one day be repaid by karma with interest, but this section also features a scathing indictment of Obama, who shows up in Flint to cheers from its citizenry as if he's going to save them from the corruption and evil that has resulted in what the film refers to as a form of ethnic cleansing, and instead makes a show of pretending to drink Flint water (only wetting his lips, not actually drinking it, as one person who was in the audience points out), theorizing that at some point during his childhood he probably had a nibble of some lead-based paint, and generally downplaying the public health crisis as though it had been resolved and was never that big a deal in the first place. "He was my President [before that press conference]," one Flint resident declares. After that press conference, she felt differently.

Obama let Flint down. Clinton never arrived. Trump, however, showed up to take a tour of Flint's water treatment plant. And that's the thing, isn't it? Trump showed up in communities that had been made to feel invisible and voiceless, communities that other politicians couldn't be bothered to take seriously. Although Moore is undeniably leftist in his politics, and certainly no fan of Trump, it's Democrats and the Democratic party that take the brunt of his criticism throughout the film, excoriated for moving away from the ideals that are supposed to be the fabric of their political identity to become a centrist party that continuously sells out its base to pander to Republicans. The scenes dealing with the failings of the Democratic party and, in particular, scenes which demonstrate the way the Democratic establishment have actively tried to dismantle the grassroots campaigns of up and coming young politicians in order to protect their old guard, who they can be confident will continue to kowtow to the special interests that have tied their money to the party, are damning. In the end what the film has to say about Trump - none of which hasn't been said elsewhere - is less profound than what it has to say about the Democratic party and the rot at the core of the whole political system.

Fahrenheit 11/9 is a good movie and often effective, though I can't say that I agree with everything it has to say. It implies, for example, that there would be a Democrat in the White House if the party had nominated Bernie Sanders over Hillary Clinton, which I think is patently false. For one thing, as the film points out, Clinton won the popular vote and was only undone by the fact of the electoral college. Most people who voted, voted for Clinton. And, while there's certainly evidence (which the film itself shows) that the party rigged things in Clinton's favor, I find it disingenuous whenever someone claims that the Democratic Party stole the nomination from Sanders without bothering to point out that Sanders is not, and has never been, a member of the Democratic Party, which is probably the biggest reason why the party didn't want him to have the nomination. Sanders should have run as an Independent because that's what he always has been and the banner under which he has always run for elected office. I also have a hard time believing that Sanders could have emerged victorious against Trump for the simple reason that Trump's response to everything he said would likely have been, "That guy's a Commie," an accusation which I imagine would be condemnatory to the "Make America Great Again" crowd even though its members are open about not caring whether Trump colluded with the Russians because that level of cognitive dissonance is just our reality now.

I also find Moore's claim that low voter turnout is the sole result of disenchantment with the Democratic party to be insincere. For sure, there are people who look at how corrupt the system is and choose not to participate and there are people who just aren't interested in politics. But there are also people who have been actively prevented from participating in the election process and to not mention the fact of voter suppression when pointing out that 100 million people didn't cast a vote in the 2016 election is to create a straw man argument that, in light of the other very solid points that Moore will make throughout the film, is entirely unnecessary. I also found the film's equating of Trump with the Hitler and Nazis to be heavy handed - not because the comparisons aren't apt, but because this point has been made so many times already that it seems redundant to play audio of a Trump speech over video of Hitler giving a speech.

Fahrenheit 11/9 is a film that is often depressing and anger inducing and sometimes deeply disturbing (there's a sequence in the film that deals with the Stoneman Douglas school shooting and shows footage that some of the kids took on their phones while the shooting was taking place). But it's also a hopeful film. While Moore views the political establishment as too far gone to be saved, there's hope to be found in the people working at grassroots levels from up and coming politicians like Alexandria Ocasio-Cortez and Rashida Tlaib who have had to battle against the gatekeepers of the Democratic party despite having the support of their constituents, to the teachers of West Virginia who refused to let their union sell them out, to the people trying to pull Flint back from the brink of destruction, to the kids from Parkland who have been determined to make their presence known and their voices heard. The America that Moore envisions is one that is truly of the people and it's one that he believes is still within reach - but he's warning that it might not be for much longer.
Posted by Norma Desmond at 8:00 AM