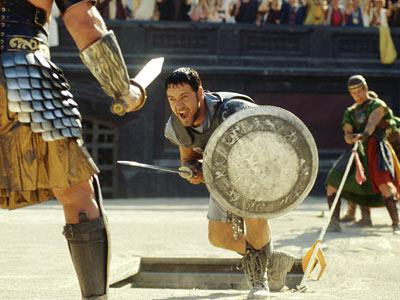 In certain circles Ridley Scott’s Gladiator is considered a masterpiece. A poll in 2002 named it the sixth greatest movie of all time. Sixth! Which put it three spots ahead of Schindler’s List and four ahead of Goodfellas. I. Don’t. Get. It. I don’t think that it’s a bad movie, mind you, I just don't think it's anything more than average. It's like Ben-Hur's morose cousin, a dour exercise in big speeches, big battles, and big personalities.

Gladiator tells the story of Maximus Decimus Meridius (Russell Crowe), a Roman General turned slave turned gladiator. As a General he was a favourite of Emperor Marcus Aurelius (Richard Harris), who had planned to hand over leadership to him. Before being able to carry this out, however, the Emperor is murdered by his son, Commodus (Joaquin Phoenix), who then orders the execution of Maximus in order to consolidate his power. Maximus escapes but his wife and son are murdered and soon after he falls into the hands of slave traders who take him to North Africa. After being bought by Proximo (Oliver Reed), Maximus begins his career as a gladiator, which will eventually take him back to Rome.

During a tournament at the Roman Colosseum Maximus reveals his identity and his plans to avenge his family to Commodus, who is forced to spare his life only because Maximus is a crowd favourite. Meanwhile, Maximus learns that he still has the support of the army and enters into a conspiracy with Commodus’ sister, Lucilla (Connie Nielsen), to remove the Emperor from power. The plot comes to light, however, and Maximus is captured before he can rejoin the army. In the climactic scene Commodus and Maximus face off in the arena, where the score is finally settled but the triumph is bittersweet.

The screenplay was written by David Franzoni, John Logan and William Nicholson (apparently with fairly extensive rewrites at the behest of Crowe) and suffers somewhat from having too many cooks stirring the pot. That being said, the plot is serviceable enough for an historical action movie where the main draw is going to be the spectacle of the action set pieces. Scott is a skilled director of action and Gladiator delivers that in spades with plenty of blood saturated deaths to cap those scenes off. The film obviously owes a debt to the sword and sandal epics of old Hollywood, films like Ben-Hur, Spartacus and The Fall of the Roman Empire (a film that shares more than a few plot similarities with Gladiator), but Scott also renders an homage to Leni Riefenstahl and Triumph of the Will in the way that he presents Commodus. I don’t particularly care for the film, but I can’t deny that Scott puts a lot into it and that he brings a high level of craft to the way that he guides the whole production.

A story like this typically requires a little bit scenery chewing but the tone throughout the film is so dark that it generally leaves little room for that larger than life style of acting. Even lines that are cheesy on the face of it – such as “At my signal, unleash hell” or “What we do in life echoes in eternity” – are delivered with such gravitas that it’s the stuff of pure drama rather than the hyper-drama of the huge, old school epics. The actor who comes closest to that style of acting, skirting right up that line but never crossing it, is Phoenix who, as the villain, has an inherently flashy role. Phoenix received an Oscar nomination for Best Supporting Actor while Crowe won in the leading category; both deliver strong performances but I don’t truly believe that Crowe was rewarded for his performance here so much as for his work in 1999’s The Insider.

Gladiator has a lot of strong individual elements but there’s just something about it that doesn’t work for me as a whole. To me it’s like a beautifully wrapped package that you open up only to discover that there’s nothing inside. It’s just so hollow, despite the best efforts of everyone involved in front of and behind the camera. To reiterate, I don’t think it’s a bad movie; I just don’t think it’s anything particularly special.