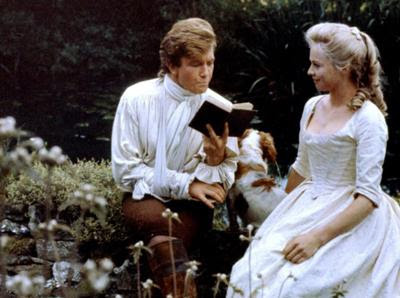 Tom Jones is an unruly film, a raucous adventure that threatens at nearly every moment to crash through the frame and into your lap. It’s a chaotic, lively, funny, and altogether very enjoyable film, one of those very rare adaptations that truly lives up to its source material. Headlined by a roguishly charming performance by Albert Finney, Tom Jones is a delightful and irreverent comedy.

Finney plays the eponymous character, a foundling who is raised in comfort and luxury thanks to the generosity of Squire Allworthy (George Devine), whose servant, Jenny Jones (Joyce Redman), confesses to having given birth to the baby and is subsequently banished from the village along with the alleged father, Mr. Partridge (Jack MacGowran). Tom grows up to be a happy and kind young man, much in contrast to Allworthy’s nephew Blifil (David Warner), who is Tom’s exact opposite in demeanour but has the social edge by virtue of having been legitimate and high born.

Tom is in love with his neighbour, Sophie Western (Susannah York), whose father, Squire Western (Hugh Griffith), would never consent to their marrying since Tom is a bastard who lives on the charity of Allworthy, though he likes Tom well enough as a person. As if this weren’t enough of an obstacle for a romance, there is also the fact of Tom’s many dalliances, which Sophie never fails to discover. Though Tom’s love for Sophie is true, as the Narrator explains, “Tom had always thought that any woman was better than none.” Meaning that since he can’t have the virtuous Sophie, he’ll happily allow his affections to be diverted temporarily by the low born (and very willing) Molly Seagrim (Diane Cilento) or any other woman who happens to come along.

Things are going well enough for Tom until Blifil is able to manipulate Allworthy into believing that Tom is a scoundrel, leading to Tom being exiled from house and home. He takes to the road where he has many adventures, marching for a brief time with a band of soldiers, getting into fights, rescuing and later bedding a woman named Mrs. Waters – who, uh oh, turns out to be Jenny Jones – finding Mr. Partridge, who reveals that he is not Tom’s father, becoming the kept man of Lady Ballaston (Joan Greenwood), and being framed for attempted murder and sentenced to hang. But, don’t worry; it all works out (even that pesky little incest issue).

Tom Jones is a story of lust and appetite – in one scene in particular those two themes converge as Tom and Mrs. Waters gorge themselves on a large meal while gazing at each other amorously. But Tom isn’t simply a glutton for sex and food; his appetite extends to life itself and all the experiences it presents. When he’s cast out of his home, he’s not happy about it, but he seizes the opportunity for adventure with an open mind and a positive attitude. As portrayed by Finney, Tom is never a character who feels sorry for himself or wallows in misfortune; he rolls with the punches and carries on, prepared to take life as it comes.

Adapting the story from the massive novel of the same name by Henry Fielding, screenwriter John Osborne does an excellent job at compressing the narrative while still retaining the spirit of the source material. Like the novel, this is a very joyful endeavour, a celebration of all that life has to offer. Director Tony Richardson nurtures that spirit in various ways, including frequent breaking of the fourth wall, cheeky asides from the Narrator, and a delightful opening sequence that unfolds as a silent film prologue. The only real criticism that I have of the film is the cinematography, which sometimes seems murky at best, ugly at worst. This may simply be a result of the film’s age, rather than the fault of cinematographer Walter Lassally, but it does detract a little bit from the film. Still, Tom Jones is a really fun, clever movie and I highly recommend it.