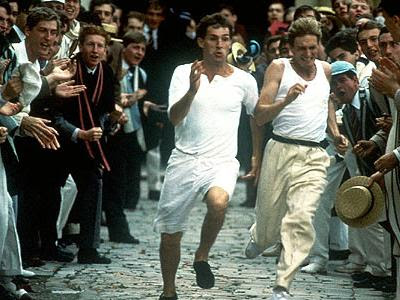 In Hugh Hudson’s Chariots of Fire athleticism is the loneliest form of triumph. The athletes are at once part of communities – a community of fellow runners and, as competitors in the Olympics, a national community – with many people rallying around them, but also terribly alone, their anxieties their primary source of company. But this drama is not simply about the agony and the ecstasy of competition; it is also about class, the importance of standing up for your beliefs, and finding the joy in life.

Chariots of Fire is about two men: Harold Abrahams (Ben Cross), a Jewish student at Cambridge, and Eric Liddell (Ian Charleson), a Scot whose missionary work in China comes into direct conflict with his plans to run competitively. After losing a race to Liddell, Abrahams hires Sam Mussabini (Ian Holm), a professional trainer. This decision brings out the anti-Semitism of his Cambridge college masters (John Gielgud and Lindsay Anderson), who inform him that hiring a professional is an ungentlemanly thing for an amateur to do and accuse him of “playing the tradesman.” Abrahams dismisses their criticism for the ugly bigotry that it is and continues to work with Mussabini, who gets him into shape to compete in the 1924 Olympics, where he will face his greatest competitor, the American Jackson Scholz (Brad Davis).

Meanwhile, Liddell faces troubles of his own as his desire to compete brings him into conflict with his very devout sister, Jennie (Cheryl Campbell). “I believe God made me for a purpose,” he explains to her, “But he also made me fast. And when I run, I feel His pleasure.” His belief that his faith and his passion are compatible is tested when he learns that the heat for the 100 metre race will be held on a Sunday. He refuses to run, even after the British Olympic committee, in the company of the Prince of Wales (David Yelland), summon him to an emergency meeting. They apply as much pressure as they can but, still, Liddell refuses to budge on his principles and ends up skipping the 100 metre and running in the 400 instead, in the place of his teammate Lord Andrew Lindsay (Nigel Havers).

The contrast between Abrahams and Liddell is finely drawn throughout the film. Abrahams is a very serious man, wounded to the quick when he’s beaten, devastated by the idea that someone might be better. “If I can’t win, I won’t run!” he declares to his girlfriend, Sybil (Alice Krige), after losing the race to Liddell, prompting her to point out, “If you don’t run, you can’t win.” Winning is everything to him, so much so that you wonder whether he gets any joy from the sport at all. Liddell, on the other hand, is pure joy. He runs with the abandon of one who loves what he does, who believes that he’s meant to do it. Running is not everything to him, which is why he can stand the thought of missing a race.

Hudson, in conjunction with writer Colin Welland, tells this story with a great deal of economy and grace. The story moves swiftly from the scenes which set up the characters – showing Abrahams at Cambridge and Liddell at the family home in Scotland – to the training sequences which compare and contrast the two protagonists, to the scenes of competition. The way things play out in the film is not entirely true to how things were in real life (in the film Abrahams loses the 200 metres to Scholz and then defeats him in the 100 metres, whereas in real life defeat in the 200 followed victory in the 100), but the screenplay is so well-constructed that this is easily forgiven. As Abrahams, Cross renders a solid, steady performance and manages to convey his character’s disappointment without ever lapsing into whining. As Liddell, Charleson conveys a sense of purity without ever making Liddell seem impossibly good or saintly or, worst of all, sickly sweet. He also manages to make you take Liddell seriously as an athlete despite his totally spazzy running style (you have to see it for yourself; it defies description), which by all accounts is a fairly accurate depiction of how Liddell ran.

Chariots of Fire is a film that will live on forever simply by virtue of its memorable score from Vangelis, but it is a film worth revisiting for more than just its music. It’s a moving and very compelling picture that has stood the test of time.