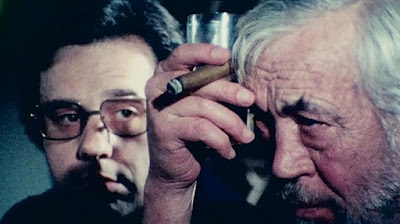 The Other Side of the Wind Director: Orson Welles
They'll Love Me When I'm Dead Director: Morgan Neville

Rarely has an artist been so astonishingly talented and so stunningly unlucky. Orson Welles was only 25 when he made Citizen Kane, a masterpiece among masterpieces, and while it certainly wouldn't be accurate to say that it was all downhill from there, his filmography boasting several great post-Kane movies, things certainly started to get a lot more difficult almost immediately. By the time of his death in 1985, his film work consisted of projects made just for the money so that he could fund his own personal projects, and those personal projects, which were largely left unfinished. One of those projects was The Other Side of the Wind which was filmed off and on from 1970 to 1976, embroiled in various legal battles for decades thereafter, and has now been completed by a team overseen by Peter Bogdanovich and Frank Marshall. They'll Love Me When I'm Dead is a documentary companion piece to The Other Side of the Wind, detailing its troubled production as well as touching on several of his unfinished projects. Both are available on Netflix.

The Other Side of the Wind is a movie about the making of a movie called The Other Side of the Wind. The director of the movie within the movie is Jake Hannaford (John Huston), once a giant of the industry and now deep in a period of decline. In an attempt to get his career back on track he's trying his hand at making something more boundary pushing and experimental, but the film has gone off the rails as a result of one of his male lead John Dale (Bob Random) having stormed off the set in the midst of filming. Despite the actor only appearing via the footage of the film within the film, the relationship between the director and the actor slowly comes into focus as the crux of the piece. Hannaford thinks that Dale is his "discovery," a kid that he's plucked out of nowhere and fashioned into an actor through his superior skills as a director. Later he discovers that Dale manufactured their chance meeting in the hope of gaining his big break and this revelation, coupled with suggestions of a sexual aspect to the pair's relationship (not necessarily consummated), sends Hannaford into something of a tailspin.

The film within the film, glimpsed in bits and pieces throughout The Other Side of the Wind, is about... I don't even know. There's this woman (Oja Kodar, whose character is billed as The Actress) who is maybe (or maybe not?) being pursued by a guy (John Dale), they have sex in a car (in front of her boyfriend, who is driving), they end up on the MGM backlot, they're both naked a lot and neither of them at any point says a single word of dialogue, and the last scene shown from the movie within the movie involves her stabbing an inflatable phallus until it collapses. Basically, it's the worst kind of late 60s/early 70s auteur movie: opaque for the sake of opaque, gratuitously sexual, mistaking boundary pushing for depth. It's ridiculous, but intentionally so - it's meant to be a parody of the worst excesses of that period in cinema. That's clear enough from The Other Side of the Wind, but Welles explicitly states as much in an interview clip included in They'll Love Me When I'm Dead, but what's revealing about the documentary is that, in a different way, Welles' approach to The Other Side of the Wind was just an self-indulgent as the filmmakers that he's mocking. In an interview about the film he describes, essentially, wanting to turn on the cameras and just see what happens. He doesn't know exactly what it's going to be, he gives various suggestions of things that might happen and says things like "and that could be the film!"; his enthusiasm is charming, but he doesn't really give the impression in these interviews that there's really a point to the project.

Although, the finished project ultimately has so many elements of autobiography that it belies this supposedly "loosey goosey" approach. The Other Side of the Wind is, after all, about a director who was a major player once but now struggles to get financing for his projects and ends up leaving the film he's working on unfinished. That, in and of itself, is Welles' story, but there's also a subplot involving the tension between Hannaford and Brooks Otterlake, once a protege and now a much more successful director played by Peter Bogdanovich... who was once a protege to Welles and, at the time the film was made, a much more successful director. There's also the fact that The Other Side of the Wind is having some fun at the expense of a certain kind of movie that was being made in the 60s/70s and the documentary points out that Welles specifically chose a location that was next door at the house that gets blown up at the end of Zabriske Point, a film which epitomizes exactly that kind of terrible movie he's mocking.

The Other Side of the Wind is a strange but ultimately entertaining movie all on its own, but it's best seen in conjunction with They'll Love Me When I'm Dead, which illuminates so much about Welles' struggles to get the film made and then to get it through post-production (among the many problems was the fact that the film had received backing from an Iranian company and after the Iranian Revolution the film was impounded by the government of Ayatollah Khomeini). I would recommend watching the film before the documentary, because the documentary will give you an increased appreciation for Welles' craftsmanship, particularly when it delves into the fact that Welles would often start filming a scene, take a break to go off and do some other movie in order to make money to put into his own production, and then come back (sometimes years later) to finish filming that particular scene - something which isn't really apparent from the finished product; a lot of it looks pretty seamless. As is the case is so many documentaries about troubled film productions, They'll Love Me When I'm Dead (which also touches on the issues that drove him out of Hollywood in the first place as well as the great many films that he left in various stages of completion) is fully worth watching in its own right as a film that's both informative and entertaining in equal measure.
Posted by Norma Desmond at 8:00 AM