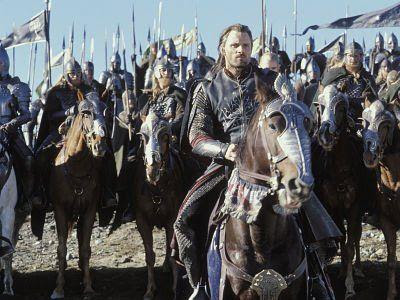 Each of the three Lord of the Rings films are distinct and strong enough in their own rights as films, but taken together you get a story that is epic in every sense of the word, a visual and narrative experience that is almost beyond imagining. The films transcend the boundaries of genre, becoming not simply a standard for fantasy films, but a standard for filmmaking period. They aren’t perfect films to be sure, but even their flaws are lovable when considered as part of the overall experience of watching this story unfold.

It is impossible to talk about The Return of the King without also talking, in part, about the two films that precede it: The Fellowship of the Ring and The Two Towers. The first film sees the formation of the team of heroes determined to destroy the one Ring that could rule all of Middle Earth, and the separation of the four hobbits from the rest at film’s end; the second film charts the parallel journeys of the two halves of the team as the dark forces grow stronger, threatening to become unstoppable. The Return of the King finds everyone coming back together again and ultimately triumphing over evil. The usual tropes of the genre are present here, but they’re also given a twist. For example, instead of one hero who must battle the exterior forces of evil and the interior forces of self-doubt in order to realize his destiny, here we have two such heroes. Frodo (Elijah Wood) is the hobbit who must travel across the darkest spots of Middle Earth in order to save it, and Aragorn (Viggo Mortensen) is the man who must accept the destiny he has always tried to avoid and become the ruler who will unite the kingdoms of Middle Earth. Their journeys are equally compelling, each offering a different take of the idea of heroism. The supporting characters are compelling as well, from the hobbit sidekick Sam (Sean Astin) to the Elvin princess Arwin (Liv Tyler), and of course the wise wizard Gandalf (Ian McKellan).

Much has been made of the special effects in the films, and rightly so. What is presented here is CGI at its most breathtaking. While I often find CGI distracting and overused, here I find it fully engrossing because it’s done so well and fits so seamlessly into the world where the story takes place. There are many great examples across all three films, but the best use of CGI is in the creation and portrayal of Gollum (Andy Serkis). This is a character so fully realized, so completely fleshed out and three dimensional (both literally and figuratively) that you can watch the films and forget that this is an animated character. Admittedly I’m biased because just about anything involving Gollum qualifies as a favourite moment of mine from the films, and because I’m one of the people who thought Andy Serkis should have been able to get a Best Supporting Actor nomination because what he does here goes so far beyond voice-work and it’s s shame he couldn’t get more recognition for it.

This is a story of amazing scope and action and features some incredibly well crafted battle sequences, but the power of the story isn’t simply and solely in the sword play. There are moments in these films that are incredibly moving and which lie at the heart of the story. Some of my favourites scenes from Return of the King include the scene in which Pip (Billy Boyd) sings a mournful ballad to a king, whose only surviving son has ridden into battle on a suicide mission in order to please him; and the scene in which Sam’s shows his determination to ensure that Frodo realizes his goal, even if he has to carry him on his back. These are films that make you care so much about the characters and each gets to have a moment to shine, to be the centre of scenes of great resonance and power.

Like the vast majority of films, these ones have their flaws. The flaw of Return of the King is that it has about eight different endings that unfold one after the other and sort of lead to a petering out of the film. But, ultimately, this is a very minor thing and the trilogy can be seen as nothing less than a masterpiece of technical and artistic achievement. Few filmmakers have ever dared to aspire to the lofty heights to which director Peter Jackson soars with these films.