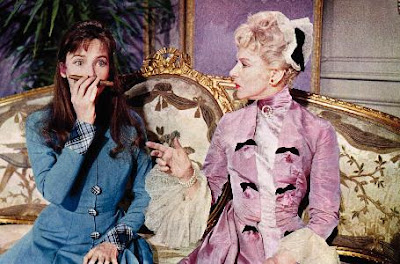 Gigi is one of those enchanting little movies that sort of blends in amongst other Best Picture winners. It doesn’t stand out the way that some other winners do and if you were to rank the winners from best to worst, it would probably end up somewhere in the middle. It’s a surprising movie; a delightful, albeit lightweight winner, that is gently subversive in its treatment of gender roles and relations between the sexes, and filled from beginning to end with memorable musical numbers.

Gigi (Leslie Caron) is a Parisian girl just coming of age who has been raised by her grandmother, Madame Alvarez (Hermione Gingold), and Aunt Alicia (Isabel Jeans) to enter the family profession and become a courtesan. During her period of education she spends time with Gaston (Louis Jourdan), a rich playboy bored with his decadent lifestyle and parade of mistresses. After ending his latest affair, Gaston decides that what he needs is a change of scenery and packs up to spend some time by the sea. Gigi and Madame Alvarez join him and, inevitably, Gaston and Gigi fall in love. Meanwhile, Madame Alvarez reconnects with a former lover, Gaston’s uncle Honore (Maurice Chevalier).

Once Gaston’s interest in Gigi is sparked, Alicia and Madame Alvarez seize the opportunity to push the would-be lovers to the next level, positioning Gigi to become Gaston’s next mistress. Gigi resists at first, not wanting to spend her life being used and discarded by men, but her feelings for Gaston ultimately lead her to accept her fate. On their first outing together Gaston is delighted at the change in Gigi; she’s no longer an awkward young girl, but a graceful young woman who seems completely in her element. A problem arises, however, when Gaston takes note of the way that the people around them look at and treat Gigi – they treat her like a common mistress when in fact she’s the woman that he loves.

The movie has a few things going for it, but I want to start with the music. There are a number of charming songs, but my favourite is “I Remember It Well,” which plays out as a gentle battle between Honore and Madame Alvarez as he tries to prove to her that he recalls everything about their fling years before and she corrects him at every turn:

Coming in second is “Gigi,” in which Gaston realizes that his feelings for Gigi are more than platonic. The only song I don’t particularly care for is “Thank Heaven For Little Girls,” a song which I think is kind of creepy, especially in this context where it opens the film and segues into Honore’s introduction: “This story is about a little girl. It could be about any one of those little girls playing there. But it isn’t. It’s about one in particular. Her name is Gigi.” While Gigi herself is an innocent, she’s also a very sexualized one by virtue of the occupation for which she is being groomed and that lends the song some unfortunate undertones. The songs come from the team of Alan Jay Lerner and Frederick Loewe, who also wrote My Fair Lady, and they give a nice, buoyant feeling to the story. The story itself, adapted by Lerner from a novella by Colette, is sharp and well-constructed and, it must be said, a little surprising given that it was made in 1958. “I was beginning to think of marriage,” Honore tells Madame Alvarez, explaining why he left her. “Imagine: marriage. Me! Oh no, I was really desperate! I had to do something, and what I did was the soprano.”

Playing Honore, Chevalier is particularly well-cast as the lovable old rogue who acts as a well-meaning devil on Gaston’s shoulder. As the title character, Caron is charming enough and has good chemistry with Jourdan, but it almost seems like a waste to have her in this role. Like Gene Kelly or Fred Astaire, Caron is primarily a dancer rather than a singer (vocals in this film are performed by Betty Wand), so it doesn’t make much sense to cast her in a film that’s light on dancing and heavy on singing. Still, the end result is a movie that’s bouncy and fun and absolutely worth a look.