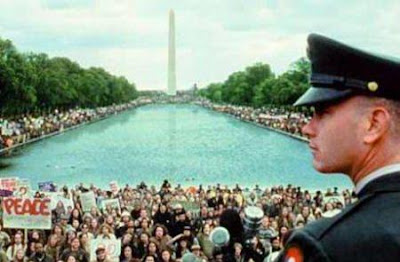 Like a modern day Candide, Forrest Gump stumbles through a life full of adventure. His is the story of a changing America, one marked by the assassination of a President, the Vietnam War, the Watergate scandal, and the AIDS epidemic. And yet, while a nation is purportedly losing its innocence over an again, Forrest retains his, remaining an optimist who believes that no matter what, things will somehow work out. Is it any wonder that this movie warmed hearts to the tune of $330 million and 6 Oscars?

The story follows Forrest (Tom Hanks) from childhood to parenthood, cutting back and forth between his past and his present, where he is sitting at a bus stop relating his tale to various listeners. At school Forrest is an outcast both because of his level of intelligence (so low that he only gets into school after his mother, played by Sally Field, sleeps with the principal) and the braces he wears on his legs, but this status allows him to forge a friendship with another outcast named Jenny (played as an adult by Robin Wright). Forrest and Jenny will remain lifelong friends, though their lives will take them in different directions and they’ll have very different experiences. Forrest’s path sees him playing football at the University of Alabama, fighting in Vietnam, playing competitive ping pong, witnessing Watergate, running a shrimping company, and running from one side of the country to the other and back again.

Jenny, meanwhile, immerses herself in counterculture and floats in and out of Forrest’s orbit for years. Eventually they have a child together, though Forrest won’t know it for several years, and they marry but their happiness is short-lived. While Forrest goes through life narrowly avoiding disaster while maintaining the sweetness and optimism at his core, the people around him learn hard lessons and suffer severe consequences. Jenny, having careened through life drenching herself in drugs and sex in an attempt to repress the abuse she suffered as a child, finally gets her life together only to learn that she has AIDS. Lieutenant Dan (Gary Sinise), Forrest’s commanding officer from Vietnam, longs to die a glorious battlefield death but over time comes to appreciate life, though only after the loss of both legs and a period of deep depression. Forrest’s friend Bubba (Mykelti Williamson) dies in Vietnam but lives on through the shrimping company Forrest starts in both their names – a company that survives only after Hurricane Carmen wipes out all the other shrimping boats in the area. Nobody else can catch a break because Forrest is in possession of the world’s supply of luck.

A film like Forrest Gump lives and dies on the strength of its leading performance. In this respect it is very fortunate to have an actor like Hanks as its protagonist because he can play a character like this without making him sickeningly precious. Forrest is a simple man on whom the complexities of many events are lost, but that doesn’t mean that he is a character entirely without depth. Hanks brings dimension to the role, particularly in his scenes with Wright, and makes Forrest more than just a blank slate who experiences, but has no real reaction, to history. Wright – who, rather incredibly, did not receive a Best Supporting Actress nomination – is similarly excellent. Unlike Forrest, Jenny’s shortcomings are not viewed as heroic and she has a more pronounced arc as a character, evolving from chaos into stability. Jenny is no saint, but Wright plays her as if she has the patience of one and the wounded and flawed Jenny (not to mention Lieutenant Dan) makes for a nice balance against the almost angelic Forrest.

At the time of its release Forrest Gump was much lauded for its visual effects and even with all the advances made in that area over the last 16 years, the effects still hold up very well. Director Robert Zemeckis is no stranger to working with special effects, having helmed the Back to the Future films as well as Who Framed Roger Rabbit prior to this one, and he’s very good at creating harmony between the story and the effects, incorporating the technology into the story rather than letting the story be defined by the technology. I really dislike the message of Forrest Gump - that if you keep your head down, don’t question things, and do as you’re told, you’ll be fine whereas if you challenge the system in any way you’ll be punished – but on the whole I must admit that it is a very well-made film in a technical sense. It’s not in the same class as Pulp Fiction or The Shawshank Redemption, two of the films it beat for Best Picture, but it is a film of sound construction and execution, even if thematically it does elevate pandering to an art form.