The Performances: Jeremy Renner in The Town 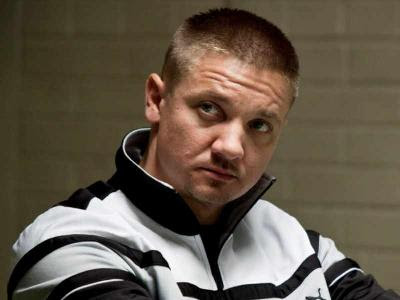 Last year Jeremy Renner was nominated for Best Actor for playing a very cool and collected character. A guy so focused that he could work at diffusing a bomb even while insurgents with guns took aim around him and the rest of his team urged him to hurry up and finish so that they could get out of their sitting duck position. He was calm personified. This year Renner is nominated for playing pretty much the exact opposite character, a bundle of nervous energy and a real loose canon.

As Jem, one quarter of The Town's bank robbing gang, Renner is the film's wild card, the character whose behavior is most likely to tip the situation one way or the other. He's got a quick temper and he doesn't always think things all the way through, as demonstrated in the scene where he finds cohort Doug with the gang's former hostage Claire. Because the robbers were wearing masks the entire time, Claire has no idea that two of them were Doug and Jem; the only identifiable mark she saw was a tattoo on the back of one of the robber's neck, a tattoo that Jem comes dangerously close to exposing as he plays a verbal game of cat-and-mouse with Doug. He's dangerous because he's careless, because he loses sight of the bigger picture when he has the chance to settle a score, because his actions are ruled by passion rather than intellect.

There are times when you wonder why the other characters are friends with Jem at all, let alone work with him, he makes things so difficult. But Renner is able to bring out another side to the character, a side that demonstrates his fierce loyalty. In one scene Doug comes to Jem's place - knowing that Jem is the only person he can really trust with this particular job - saying, "I need your help. I can't tell you what it is, you can never ask me about it later, and we're going to hurt some people." Jem gives him an easy look and a quick smile. "Whose car we takin'?" End of discussion. As far as he's concerned, all he needs to know is that Doug asked a favour. He's the kind of ride or die friend that someone in Doug's line of work needs - though it would be nice if he had a little more sense.

Renner plays Jem as a twitchy, angry creature who is capable of anything. He's compelling precisely because we don't know how far he'll go or how much he's willing to sacrifice. He's determined not to end up behind bars but, at the same time, his demeanor doesn't denote desperation, not even in the film's intense final act when he essentially committs suicide by cop. He's not desperate, just determined - determined to end things on his own terms and go out in a blaze of glory. As played by Renner, Jem is the kind of character you can't take your eyes off of, the kind of character who breathes life into the remotest corners of the story. Renner is an integral part of The Town's success, his gritty, lived-in characterization helping to keep the story grounded in authenticity and pushing the action towards the very limits.

I agree, I found Renner's performance fascinating, it was one of the best aspects of the film.
Very well written!

I didn't like this film much overall, but there's no doubt that Renner was by far the best thing about it, and in some ways the only element that really worked all the way through. It's an intense and nuanced performance, bringing a lot of life and energy to this character who could've (and probably would've) been just another puddle-deep movie tough guy in the hands of a lot of other actors. What a death scene, too, more for the little touches — like that sip of soda he grabs from a discarded fast food drink container — than for the big action hero gestures.

A powerhouse performance. He doesn´t think things through but don´t you realize who the real knucklehead is at the cafe? 1. Doug IS ON A DATE WITH A FORMER HOSTAGE. 2.Doug is very much aware of Claire having seen Jems tattoo(which should only inspire to reject her further),Jem does.Not.Know. How could he? He sadistically lingers and hints but only cause he think Doug is being stupid wanting this specific tail...Jem is correct.Wellwritten piece of you.

Renner only actor of the 5 who didn´t t win a single award due to the films genre and plot. No matter how good a film by Affleck is,it can only harnest a supporting actor nom,2nd time now.