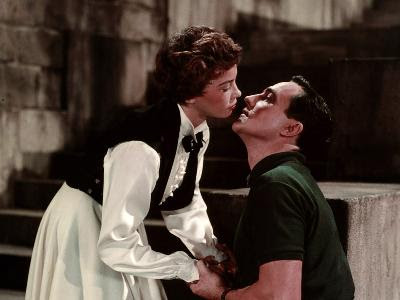 An American In Paris holds a special place in my heart because it marks the moment when I fell in love with the musical as a genre. It’s a flawed film, and certainly a distant second to Gene Kelly’s best musical, Singin’ In The Rain, but it nevertheless remains a great film and a great entertainment. When you watch Kelly, who simply exudes the pure joy of performance whenever he’s on screen, you can’t help but feel happy. This film is no exception.

Kelly stars as Jerry Mulligan, an ex-G.I. who has stayed on in post-war Paris in order to establish himself as a painter. He meets two women: Milo (Nina Foch) who is wealthy and wants to be his patron (more because she wants him in her bed than out of love for his work), and Lise (Leslie Caron), a young woman with whom he’s instantly smitten, but who is already romantically entangled. She likes Jerry, but is engaged to Henri (Georges Guétary), an older man who kept her safe during the war. Jerry and Henri know each other, but neither knows of the other’s relationship with Lise. The journey towards discovery is marked with some of the best song and dance numbers you’ll ever see.

Kelly is, of course, a masterful dancer and he and Caron have great chemistry as dancers (the “Our Love Is Here To Stay” number, which finds them dancing away from and towards each other by the side of the Seine is one of the film’s many highlights), but as characters, Jerry and Lise’s relationship doesn’t quite hold up. The problem stems perhaps from the age difference (in real life Kelly and Caron were nearly 20 years apart in age) and from Lise’s similarly structured relationship with Henri. Lise comes across more as a scared girl seeking a father figure than she does like a woman burning with passion for either man. And Jerry doesn’t help things with the way he charmingly harasses her into going on a date with him after she’s already turned him down. In their conversation leading up to the “Our Love” number, Jerry tells Lise that he’s “not sure if [she’s] a still water that doesn’t run deep” and remarks that “with a binding like [she’s] got, people are going to want to know what’s in the book.” He says these lines in an adoring/romantic tone of voice but when you actually listen to what he’s saying you see how shallow this relationship is. Not only does Jerry not know who Lise is as a person, he actually doesn’t think that there’s very to her at all – the attraction on his part is purely superficial.

I mentioned the age difference between Kelly and Caron as part of the problem, but I’ve never actually been entirely sure whether or not Jerry is supposed to be the same age as Kelly was in real life. It would certainly make sense for Jerry to be younger, not only because of his relationship with Lise, but also because of his relationship with Milo. Milo is portrayed as a predator who wants to use and control Jerry, but that doesn’t entirely work because Kelly and Foch seem pretty evenly matched. In their initial scenes, Jerry is surprised to realize that Milo is after him because such a relationship hadn’t occurred to him. It seems less like Jerry is a naïve young man who wouldn’t give an older woman a thought, and more like Jerry is a proud man who wouldn’t give a thought to being with a woman who has more money than him. The idea that Milo would want to “keep” Jerry as a boy toy seems silly, because Jerry seems too old to be kept.

These are the biggest problems with the film, but what works are those elements which root it intractably in the musical genre (i.e. the singing and the dancing). Singin’ In The Rain is, without a doubt, the Gene Kelly movie, but in one particular aspect that film falls short where An American In Paris succeeds. Both films feature an extended dancing sequence at the end. In Rain the sequence, though great, feels tacked on and doesn’t flow easily with the rest of the film. In Paris, however, the ballet at the end fits seamlessly with what has come before. Lise has left Jerry. He’s heartbroken and imagines himself in a picture he’s just drawn. The picture comes to life and what follows is a ballet sequence lasting about fifteen minutes and which effectively summarizes the various emotions Jerry has felt during the course of his relationship with Lise. It’s alternately funny and sad and romantic, but above all it’s gorgeous from beginning to end. It’s definitely my favourite musical sequence in all film and it completely makes the movie for me.

The film ends happily (if there’s a girl to be had, does Gene Kelly ever not get her?), concluding only moments after the exhilaration of the American In Paris ballet, which is wise because any extended scene following that would feel like an anti-climax. Although the central relationship leaves me somewhat cold, the film as a whole makes me so happy that it’s easy for me to overlook that and be satisfied with the ending. Jerry gets his girl. Who could ask for anything more?