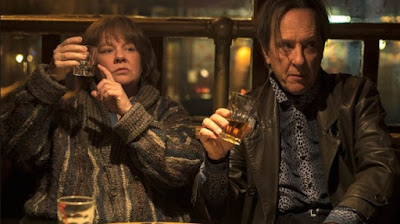 Likeability is a very overrated quality in a protagonist. We don't need to like someone to find their story compelling and engaging. We don't even have to like them in order to root for them to come out of things alright. Good thing, too, since Can You Ever Forgive Me?'s Lee Israel, played with marvelously jagged edges by Melissa McCarthy, is pretty difficult to like most of the time. She's a nasty, misanthropic drunk who doesn't think twice about using people, screwing them over, and manipulating them. She's also a lonely person who tends to self-sabotage relationships because she fears connection/expects rejection, adores her cat, and is capable of deep compassion for people who are (somehow) worse off than she is. She's also pretty damn funny ("Oh to be a mediocre white man who doesn't realize how full of shit he is," she laments at one point and, lord, truer words have rarely been spoken) and the movie itself offers a great balance of seriousness and humor. It's one of the year's lowkey delights.

Set in the early 1990s, Can You Ever Forgive Me? finds its protagonist well past her glory days - which may actually have been nothing more than a "glory day." Though she's had some success as a writer in the past, Lee Israel now works an office job (or she would, if she didn't get fired in the opening moments) and can't even get her agent (Jane Curtin) to return her calls - not that that matters since when she finally does get to talk to her agent she's told that no one is interested in the book she wants to write and that if she wants to have a career as a writer she needs to start playing nice, networking, and stop burning bridges at every turn. This is impossible for Lee to even contemplate because she has no patience for other people, but her unwillingness to play ball doesn't negate her need for money. She's behind on her rent and her cat is in need of a vet's attention so, in desperation, she sells a prize possession: a handwritten letter from Katharine Hepburn. When she later finds a letter written by Fanny Brice folded up and left in a book, she sells that, too, and begins to realize just how lucrative the "letters of dead celebrities" business can be. The only problem is that she has no more letters - at least, she has no more genuine letters.

Over the last several years McCarthy has become known for broad, often foul-mouthed, overtly comic characters. She's good at that, but she's good at subtler, more character based work, too, and that ability is on full display in Can You Ever Forgive Me? Lee is a hard character, but that hardness masks a soft, vulnerable center. We don't learn much about her life beyond the period that we see unfold in the film, but through McCarthy's performance we're given to understand that she rejects people before they have a chance to reject her, that she can only let someone in so far before she has to put on the brakes because to be any closer than that with someone would be to let down her defenses and give them an opportunity to hurt her. We see this play out in the tentative romance she has with a book store owner which ends before it even truly begins because Lee just can't bring herself to let someone in, even a little bit. Director Marielle Heller doesn't belabor the point, letting Lee's retreat from this relationship, and the profound sadness of someone who is so desperate for some kind of connection being too afraid to actually connect, speak for itself.

The one relationship Lee does form during the course of the film is not a romantic relationship, but a sort of bonding of kindred spirits with a fellow drunkard of great disrepute. This is Jack Hock, played superbly by Richard E. Grant as a man who is at once so similar to Lee and yet so completely her opposite. Both are drunks who will not hesitate to take advantage of someone for their own gain, but while Lee does everything she can to separate herself from the rest of humanity, Jack embraces it, engaging with the world as a social butterfly whereas Lee engages like a hermit. He's determined to go through life like it's nothing but a good time, as if he's forever living inside an amusing anecdote even though his circumstances are much darker than he lets on. He manages to stir something in Lee - not romantic in the least, both being gay - that compels her to let him further into her life than anyone else, even letting him in on the secret of her newfound criminal enterprise, which he has a difficult time comprehending because the idea of paying hundreds (or thousands) of dollars for someone else's correspondence is completely ridiculous to him. He's a great character, funny and tragic in turn (and sometimes all at once), and while McCarthy is bound to get plenty of attention for her performance as the Best Actress race develops, I hope that Grant emerges in the conversation for Best Supporting Actor because he more than deserves it.

Can You Ever Forgive Me? works on several levels. It works as a portrait of two sad, damaged and damaging people who find in each other the understanding that so often eludes them, and then lose each other because they just can't help from giving into their worst and most destructive instincts. It works as a comedy about those same two people getting into trouble and not giving a damn because they're having such a good time (most of the time) while doing it. And it works as a slow burning thriller about someone who, in desperation, turns to crime and only realizes that she's in over her head once it becomes too late to pull out of it unscathed, becoming more and more frantic as it becomes increasingly clear that the game is almost up. The tension towards the end is almost unbearable because, despite everything she does throughout the film, you kind of end up rooting for Lee to get away with it all - even though you don't necessarily like her, even though she herself is almost entirely unrepentant. The title might ask forgiveness, but she seeks none, and it's that pitch perfect "sorry not sorry" tone that the film captures so well and which makes it such an engaging piece of work.
Posted by Norma Desmond at 8:00 AM