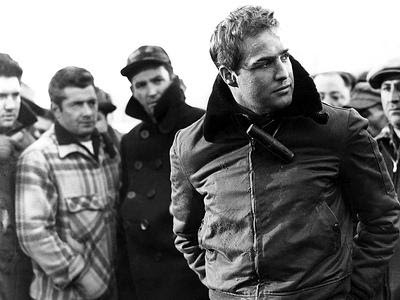 On The Waterfront is a film widely recognized as Elia Kazan’s response to criticism of his cooperation with HUAC, but even though the political subtext is firmly rooted and aimed at a particular moment in time, the film itself hasn’t become dated. It remains a carefully measured study of one man’s choice between being a fellow traveller in something that he knows isn’t just, or risking his life to stand up for a principle that everyone believes in, but no one believes in enough to die for.

The film is divided into two distinct worlds. There’s the rough world of the waterfront where some men thrive by doing favours for Johnny Friendly (Lee J. Cobb), and where all men survive by being D & D (deaf and dumb) even while they’re starving from lack of work and even if their friend happens to succumb to a suspicious “accident.” The other world – still rough, but not as rough – is occupied by idealists such as Father Barry (Karl Malden) and Edie Doyle (Eva Marie Saint), people who believe that the only way to free themselves of tyranny is to fight against it, rather than silently accept it. Terry Malloy (Marlon Brando) begins life in one world and spends the film fighting for the right to exist in the other. The driving force behind his desire for movement comes from his relationship with Edie, but before they even meet Terry knows that he can’t go on with the waterfront life. The film begins with him luring Joey Doyle (Edie’s brother) to a rooftop for Johnny Friendly. Terry thinks they’re just going to talk to him and is dismayed when he finds that Joey has been thrown off the roof to his death. His participation in Doyle’s death wakes him from his complacency with the way the waterfront is run. When he gets involved with Edie and Father Berry, he finds a way – and a reason – to turn things around, even as the people who would benefit most from change (the longshoremen) fight him at every turn.

This is a film with a point to make, but it doesn’t make it at the expense of the story, nor does it put all its energy into bashing the viewer over the head with its meaning while letting its characters languish underdeveloped. The characters in this film are full-blooded and full of life, and the story itself is made up of moments that are deeply moving. Everyone knows the “I coulda been a contender” speech that Terry makes to his brother Charlie (Rod Steiger). This speech has been referenced and parodied so much that, by all rights, it should have lost its meaning by now. But when you see it in the film, when you see the speech in the context of Terry having become fed up with the injustice of the world and men being denied their “shot,” when you see Charlie pull a gun on Terry and the way Terry just pushes the gun away, unable to believe that they’ve come to this point, you hear a speech that remains meaningful and relevant. Later, Terry finds Charlie dead and hanging from a hook, his punishment for not having made Terry fall in line. In an autobiography, Brando stated that during his first viewing of the film he had to walk out because he couldn’t stand his own performance. It’s hard to believe, given how pitch perfect his performance is, especially in the scene where Terry finds Charlie’s body, and the scene directly before it when he breaks into Edie’s apartment. This is a performance so complete and natural that you don’t think of Terry Malloy as a character being played by Marlon Brando, but as a person in his own right whom you just happen to be watching. The same can be said of Edie, a character who could easily have been a simpering victim, but is instead a strong and independent woman as played by Eva Marie Saint, who more than holds her own opposite Brando.

There are moments in the film that could easily have lapsed into false sentimentality – Terry’s walk at the end, for instance – in the hands of a lesser director. That Kazan can keep the film in line, that he absolutely earns the moments that would otherwise seem sappy, is what makes it unfortunate that in some circles he’s considered first as someone who named names, and second as a brilliant director. Whatever you think of Kazan’s politics – and keeping in mind that the HUAC/McCarthy era isn’t quite as black and white as it is often presented – his skill as a storyteller cannot be denied. On The Waterfront is a film about a specific place in time, but told in a way that ensures it remains timeless, a treasure of a film that can be returned to again and again.