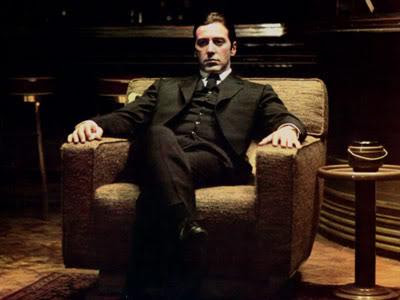 I go back and forth over whether I think The Godfather: Part II is the better of the first two instalments of the trilogy. On one hand, the sequel obviously benefits from having the original as a starting point with much of the set-up already done. But on the other, I think that Part II contains the key elements to the trilogy as a whole. Add to that the fact that the world we enter with Part II is darker, more complex and ultimately more ambiguous than its predecessor, and you’ve got a tough choice to make indeed.

The film tells two parallel stories. One follows Vito (played as an adult by Robert De Niro) who begins life in the village of Corleone in Sicily and sees the members of his family picked off one-by-one by the local Mafioso. He escapes to America, takes the name Corleone and eventually usurps power from the local Don to begin his own consolidation of power. The other story follows Michael (Al Pacino), already in control of his empire and struggling to maintain it against conspiracy within his organization, a Senate committee out to bust him, and his own familial troubles. Family is the crucial element of the film. Vito’s rise to power is shown as a way to safeguard his American family and give them a better life, as well as a way to ensure that he can return to Sicily and avenge the family he lost there. The Don he eliminates holds his territory with an iron fist. When he’s assassinated by Vito, it isn’t framed as a bad act, but as something which will ultimately enable Vito to take care of his family. For Vito, business is a way of maintaining the family. For Michael, on the other hand, family is something that must be sacrificed for the sake of business.

The Godfather: Part II is essentially the story of Michael’s isolation as he drifts further and further away from what Vito established. One brother (Sonny) is already dead at the beginning of the film, sister Connie (Talia Shire) is a mild irritation, someone he has to deal with but whose presence has little effect on his life, and adopted brother Tom Hagen (Robert Duvall), once in the thick of things as the family’s consiglieri, is being pushed further and further out of the family business for his own protection, as Michael tries to assure him. His marriage to Kay (Diane Keaton) is already falling apart as she grows increasingly impatient with his empty promises to make the family legitimate. Eventually he will push her away completely and, as in The Godfather, shut the door on her, this time definitively. And then there’s Fredo (John Cazale)…

The key to understanding the trilogy as a whole and Michael as a character lies in the death of Fredo, whom Michael orders to be killed. The first film is leading up to this moment, the moment when Michael is so far gone, so completely enveloped in the “business,” that he can order Fredo to be murdered as if that is “just business” and not personal. Everything in the third film leads away from it and much of that film concerns Michael’s guilt over his act (“My mother’s son,” he laments in Part III). How did Michael get to this point? How did the “good” son of The Godfather, the one least expected to get into the business, end up being the most ruthless of them all? It is perhaps his lack of previous contact with this world that made him so susceptible to it, like someone whose immune system is compromised by sudden exposure to a disease never before encountered.

Fredo is the soul of the film and when he kills Fredo, Michael kills his soul, committing an act he will never be able to fully justify or find redemption for. As Fredo, John Cazale renders a heartbreaking performance. “I’m your older brother, Mike, and I was stepped over… I’m smart. Not like everybody says… like dumb… I’m smart and I want respect!” he says to Michael, who responds dispassionately. It’s an emotionally charged role, that of the older brother trying to step out of the shadow of the younger, the brother who is aware that no one believes he is capable of running the show, the one who is forever stuck at the figurative kid’s table. Cazale’s film career was brief, but he left a filmography that any actor would be jealous of, having appeared in The Conversation, Dog Day Afternoon, and The Deer Hunter in addition to the first two Godfather films. Pacino, Keaton, Duvall and De Niro are all great, but it’s Cazale who really stands out from the crowd as a man desperate to show that he’s as good as his brother while also being so slavishly eager to please the same.

The story presented here is much bigger than that of The Godfather and I know that some become impatient with it, feeling that it digresses too much, that it isn’t as tightly focused as the first. I also know that some prefer Part II because it’s more epic in scope and much darker, showing a Don who is more realistically cold-blooded. But anyway you look at it this remains an excellent film, its story a tragedy of Shakespearean proportions.

I'm glad someone here has love for John Cazale. He was the best thing in that film. I really felt for that Fredo character. He was the one I connected with more than anyone. Cazale made him into a fully-realized yet flawed man.

Very interesting review,
I too like John Cazale, he certainly has one of the best filmography ever in terms of quality.
I think I slightly prefer the second part of the Godfather, if only for De Niro's fantastic performance...