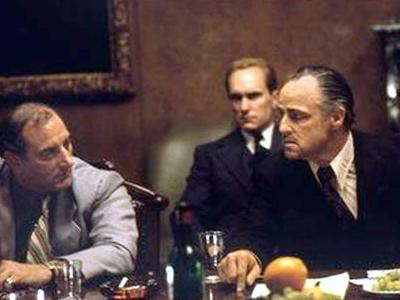 It was unlike the mobster movies that came before, and set the standard for all those that followed. While James Cagny and Edward G. Robinson played bad guys in movies that knew they were bad, The Godfather succeeds by creating its own moral compass, eliminating the law and order side of the story and focusing squarely on the cloistered world of the mafia and its men. It isn’t just a matter of bad guys being bad; this is a story of social and business politics, of moral shades of grey, and above all else, family.

The Godfather opens and closes on family events: a wedding at the beginning, and a christening towards the end. The opening scenes are familiar even to those who haven’t seen the film as they’ve been referenced and parodied so much. This is where Michael (Al Pacino), in his soldier’s uniform, informs Kay (Diane Keaton), that his father made a man “an offer he couldn’t refuse,” and where Brando appears as Don Vito Corleone, creating the cinema’s most lasting and iconic image of the mafia boss. The first scene with Vito and Bonasera, a man who has come to ask a favour, is one of the best in the film because it lays down the code, the governing laws of this world. The Don chastises Bonasera for going first to the police – the police can do nothing for him; this is a “family” matter. He then tells him that he’s not in the business of murdering for hire – the men who caused Bonasera’s daughter pain will be made to suffer, but the punishment must fit the crime. And then he utters that immortal line: “Someday, and that day may never come, I’ll call upon you to do a service for me.” And he will, later, ask a favour of Bonasera, but not of the kind that Bonasera no doubt fears.

Vito is the looming, central figure of The Godfather, although Michael is its central character. At the beginning of the film he is the son who isn’t involved in the family business – his brothers, the hot-headed Sonny (James Caan) and soft-headed Fredo (John Cazale) are directly involved, adopted brother Tom Hagen (Robert Duvall) acts as the family’s counsel – but as the story progresses, he sinks deeper and deeper into the mire. When the time comes for the reins to be passed, they go to Michael, who must learn quickly how to handle them and consolidate his still unstable power. The baptism sequence operates on multiple levels. On the literal level, Michael is acting as Godfather to the baptized child. On the figurative level he is becoming the Godfather and undergoing a baptism of his own as his enemies are eliminated one after the other and he makes his first great demonstration of power.

Michael wasn’t the son being groomed to take things over; shortly before he takes his first steps into the family business, Vito tells him, “I never wanted this for you… I always thought when it was your time that you would be the one to hold the strings. Senator Corleone. Governor Corleone. Something… There just wasn’t enough time.” But even though Michael isn’t the most obvious choice, he does turn out to be better suited for the position than any his brothers. Sonny, even if he didn’t die in a hail of bullets, is too unpredictable, too quick tempered. Michael, on the other hand, is calm and collected and treats what comes as part of the business. When he and Tom learn that Tessio (Abe Vigoda) is a traitor, Tom expresses surprise, but Michael takes the news calmly. “It’s the smart move. Tessio was always smarter.” Michael recognizes that power is up for grabs now that Vito is out of commission, and he doesn’t take it personally that people are trying to grab it. He doesn’t take it lightly, though, either.

The Godfather is a film that is brutal for the myriad ways in which people are threatened and killed, but within the context of the story the Corleones aren’t considered villains. Even when Carlo (Gianni Russo) is murdered after being reassured that nothing will happen to him (“Do you think I’d make my sister a widow? I’m Godfather to your son” Michael says), we the audience are assured that this isn’t bad since Carlo betrayed the family. There aren’t any traditional good guys in this film – the only cops are crooked and anyone who’s not “with” the family is actively working against it. The film’s moral compass is skewed towards the Corleones because the story limits itself to them and the people who try to harm them; the people whom the Corleones harm through their various business endeavours don’t factor here at all.

It is easy to take measure of how influential The Godfather has been since its release. It has been echoed and quoted and satirized numerous times (perhaps most notably in The Freshman, where Brando plays a mobster who is a spoof of Don Corleone), and the image it created of the romanticized gangster – the honest man simply trying to run his business – continues to shape the way we look at the mob in film and television. But perhaps even more importantly it has transcended the realm of fiction to become, in a way, a philosophy of life. You don’t take sides against the family. It’s business, it isn’t personal. And you always leave the gun, but take the cannoli.