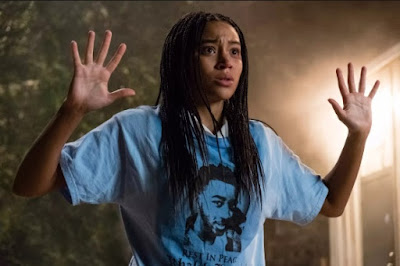 I don't know that there's an emptier platitude than when a white person states that they "don't see color." It's a statement that's intended to indicate to whomever is listening that the person making it isn't racist - is, in fact, so not racist that he or she doesn't even recognize that the concept of race exists - but which actually just announces that the person saying it is blind to the way that racism is so institutionalized that it's an inescapable part of day to day life. If you're going to say "I don't see color," you might as well just say "I can't be bothered to see what you're going through, even though it's happening all around me." White people and people of color experience the world in different ways, because the world experiences them in different ways. White parents don't need to talk to their kids about how to minimize the possibility that they will be shot by the police; black parents do. That's tragic and it's wrong and you can't solve a problem without acknowledging that it exists in the first place.

Adapted by Audrey Wells from the novel by Angie Thomas, The Hate U Give tells a story in which race and identity are paramount. It centers on Starr (Amandla Stenberg) a teenager who lives in a neighborhood that is predominantly poor and black but attends a private school full of rich, mostly white kids. As she explains in voiceover, this leaves her feeling divided against herself, adopting one persona at school while living another at home. She is vigilant when she's at school, determined not to give her classmates a reason to look down on her or view her through the prism of any number of racial stereotypes - she accepts slights such as someone cutting in front of her in a line up because she knows that if she speaks up she'll become the "angry black girl;" she won't let her boyfriend come over to her house because she doesn't want to be written off as being a girl from "the ghetto." Her boyfriend, Chris (KJ Apa), is white and sort of clueless, telling her that he doesn't see color even as she's trying to explain to him that she needs him to see her as black if he's going to understand even a modicum of what she's been going through.

The stress of living two lives and of trying to navigate the competing desires of her parents - her mother (Regina Hall) wants to move out of their neighborhood due to the gang presence there, while her father (Russell Hornsby) wants to stay because abandoning the neighborhood to the gangs would be doing a disservice to their community, which is full of people who can't just up and move away - would be compelling enough on its own, particularly given the depth and nuance of Stenberg's performance, but The Hate U Give merely uses this premise as the foundation for a much larger and more eventful story. Although she's dating Chris, Starr is also drawn to Khalil (Algee Smith), a boy from the neighborhood that she's been friends with since infancy but hasn't seen much of lately because their lives have been set on such different paths - hers onto one designed to raise her out of the poverty and lack of opportunity that's all around her, his onto one designed to lead him into what Starr's father refers to as "the trap" represented by the drug trade with its false promises of profit. After running into each other at a party from which they're forced to flee when a fight breaks out and a gunshot is fired, Khalil gives Starr a ride home and they're pulled over by the police. The traffic stop will end with Khalil being shot three times and Starr left with a choice: does she keep her head down, stay silent and just move on with her life as best she can, or does she speak up and attract the attention (and ire) of both the police and the gang leader (Anthony Mackie) that Khalil was dealing for.

From this point forward The Hate U Give proceeds in breathless fashion, following several different threads as the various facets of Starr's life wind together around this incident. There's her grief at the death of her friend (the second friend she's lost to gun violence, having seen another gunned down years earlier), her fear about speaking out against the police and the pressure she faces from activists to testify at a grand jury inquiry, the threats that she and her family receive from the gang who don't want an investigation to turn in their direction, her desire to keep her identity as the witness to the shooting a secret so that the kids at school don't know that she was involved and draw a negative, stereotypical inference, and her relationships with her white friends at school, one of whom decides that the aftermath of a black kid getting shot is the perfect time to express that "all lives" matter, and her relationship with her peers generally, some of whom use the shooting as an excuse to cut class under the guise of protesting the epidemic of black people being killed by the police. There's also a subplot involving Starr's brother Seven (Lamar Johnson), with whom she shares a father but not a mother and whose mother is in a relationship with the gang leader who is threatening Starr and her family. In a lesser movie all of this plot (which also includes a protest that turns into a riot) might start to seem overwrought, but director George Tillman Jr. keeps things on an on even keel and, more importantly, keeps things grounded in the reality that the system is rigged against black people who, in the words of one of the characters, cannot do enough to seem "non-threatening" when their very blackness has been weaponized and turned into something menacing in and of itself.

The Hate U Give is a deeply engaging and moving film in addition to being intensely, sadly relevant. Elements that might seem like weaknesses in a less skillfully made film - such as how incredibly busy the plot is and the inelegance of some of the exposition in the dialogue - are easily overlooked here thanks to the emotional depth of the storytelling and the effectiveness of the performances. Few performances this year will be better than Stenberg's as the conflicted Starr, caught between worlds, faced with nothing but painful choices and trying to do more than simply get through it, and she's ably supported by the rest of the cast, particularly Hornsby and Hall as parents desperately trying to keep their children safe in circumstances where any number of small mistakes could end in tragedy. The Hate U Give is a solid movie that leaves you rapt from beginning to end.
Posted by Norma Desmond at 8:38 PM