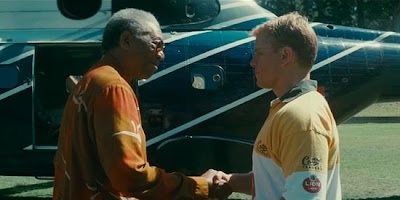 What It Had Going For It: Dude, it's a Clint Eastwood movie starring Morgan Freeman as Nelson Mandela. If that doesn't scream "Oscar," I don't know what does. In addition, it had the benefit of exploring themes that would certainly resonate with American audiences, coming so soon after the election of Barack Obama.

What Went Wrong: It's hard to say. I mean, Invictus isn't a "great" film but it's the kind of feel good, inspirational movie that should have been able to slip into a ten nominee Best Picture race with ease (I mean, The Blind Side got in there, after all). Instead, it got shut out of every category except Best Actor (for Freeman) and Best Supporting Actor (Matt Damon). Maybe people felt that the film simply didn't live up to its subject?

Legacy: I suppose it's still too soon to say what Invictus' legacy will ultimately be. It received fair reviews from critics but bombed at the box office and seems to have mostly faded away. In all likelihood it will be remembered as one of Clint Eastwood's lesser directorial efforts and one of Morgan Freeman's best performances.

I think it should have got more recognition.
I really enjoyed it, it's nothing truly ground breaking or memorable but it was a very entertaining feel good film.
I thought it was better than The Hurt Locker anyway....

We will have to agree to disagree on The Hurt Locker.