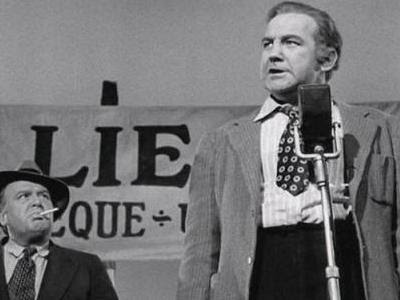 Absolute power corrupts absolutely and in All The King’s Men, the more guileless you are when you attain power, the more quickly you become corrupted by it. Based on the novel by Robert Penn Warren and directed and adapted by Robert Rossen, this is a sharp, sometimes bitter look at the dark side of politics. Its impact today is perhaps not as great as it was in 1949, but it remains a film very much worth seeing.

All The King’s Men charts the rise and fall of Willie Stark (Broderick Crawford), whose beginnings have the makings of a folk hero. He teaches himself law and, once he becomes a lawyer, he works tirelessly for poor people which gains him a great deal of popularity. He is deeply critical of political corruption but what he learns about how to win, he adopts the tactics of corrupt politicians. Knowing that he holds little appeal to the elite, he actively pursues “the hick vote,” charismatically playing on his “just folks” persona and riding a wave of support all the way to the governor’s office. Once in office, Stark goes mad with power, doling out bribes and having his political enemies “taken care of.” Rossen depicts Stark in overtly fascistic ways and yet, even as his megalomania becomes undeniable, those close to him manage to retain an idealistic view of him. His aide, Jack Burden (John Ireland), knows that Stark has done terrible things and that he’s bought up all the local media outlets in order to keep his misdeeds from becoming public knowledge, but he continues to defend him, telling his father, “I really believe that Stark wants to do good. You do, too. It’s a matter of method. Many times, out of evil comes good.” This line echoes an earlier line of Stark’s – “Do you know what good comes out of? Out of bad.” – and is the question at the heart of the story. Can the ends really justify the means?

Eventually Jack will break from Stark, due not only to his growing distaste for Stark’s methods, but also because of a woman, Anne (Joanne Dru), who begins the film as Jack’s girlfriend but later becomes Stark’s mistress. She buys into Stark’s rhetoric hook, line and sinker and defends his methods to Jack while also insisting that, when the time is right, Stark will leave his wife and marry her. She knows firsthand that Stark’s private self is drifting further and further away from his public persona and yet for so long she continues to believe that there’s some truth to what he’s telling her. Eventually she ends up as disillusioned as Jack, not just because her affair with Stark ends predictably but because he’s also manipulated her into betraying a family secret that will, ultimately, tear her family apart and set in motion to events of the film’s climax.

In adapting the novel to the screen Rossen abandons a lot of the complexity of the story, particularly where the characters of Anne and Jack are concerned. It doesn’t really live up to the ambitions of the novel but, taken on its own, it’s a fairly compelling piece of work. It does sometimes drift a bit too far into melodrama but for the most part Rossen is able to pull things back enough to keep it from flying off the rails. Plus, filmmakers of that era handled melodrama better than filmmakers working today tend to – or, perhaps it just seems that way because irony was not quite as ubiquitous then as it is now.

Crawford delivers an incredibly memorable performance as the larger than life Stark, the sheer force of his personality very nearly wiping all the other actors off the screen. The only of his co-stars who can really effectively withstand this hurricane of a performance is Mercedes McCambridge who plays Sadie Burke, Stark’s advisor and sometimes his mistress. Both actors won much deserved Oscars for their performances and bring the kind of passion and energy necessary to keep a project like this afloat. The film is worth watching for many reasons, but these two performances are chief amongst them.