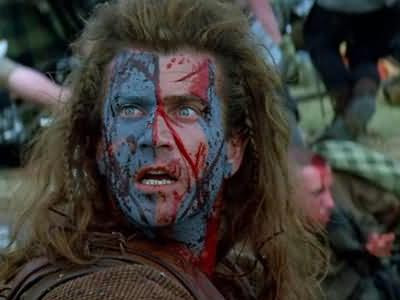 It sounds crazy in the cold, harsh light of 2011, but once upon a time Mel Gibson was considered one of the most likeable movie stars in the world. Weird, right? The 80s, 90s and the first couple of years of the 2000s were extremely good to him, seeing him churn out hit after hit and even winning two Oscars for producing and directing Braveheart. He’s a lightning rod for controversy now but back then he was king of the world (at least until James Cameron came along). That his star power could push a bloated and somewhat self-indulgent film like Braveheart to Oscar gold over fellow nominees like Apollo 13 and Sense and Sensibility, not to mention the un-nominated Toy Story and Leaving Las Vegas is proof of just how untouchable he once was.

Gibson stars as William Wallace, a Scot suffering under the occupation of King Edward I, whose rule ultimately results in the deaths of Wallace’s father, brother and wife. In response to his wife’s death, Wallace takes a stand by murdering a local magistrate in retribution, an act which inspires the villagers around him to join in rebellion and take back the town. The rebellion grows from there, with Wallace leading his army to further and further victories and gaining the admiration of Robert the Bruce (Angus Macfadyen), but also earning the enmity of the English.

Edward I plots an invasion of Scotland even as he sends his daughter-in-law, Princess Isabelle of France (Sophia Marceau) to make peace offers with Wallace. Isabelle reveals the recent movements of the English army to Wallace and the two have an affair which results in pregnancy. Years pass as Wallace continues to wage war against the English but he is eventually betrayed by the father of Robert the Bruce, resulting in his capture and trial for treason. In perhaps the film’s most famous scene, Wallace endures torture at the hands of the English while encouraging his countrymen to continue fighting for their freedom.

Written by Randall Wallace, Braveheart is an old school kind of film in that it doesn’t sweat the details when it comes to historical accuracy. Instead the screenplay just uses historical events and people as a starting point to create its own story – lots of movies do that, though few are quite as notoriously inaccurate as this one. Still, the story that Wallace and Gibson create is compelling for what it is – a bloody adventure story with plenty of action, a good dose of humour, and a little bit of sex to keep things interesting. Braveheart is a film that hits so many of the expected notes it may very well have been put together on a Hollywood assembly line. I’m not suggesting that it doesn’t hit these notes well, simply that it doesn’t present anything particularly revolutionary or deep. It’s as good as it needs to be and nothing more.

Braveheart is the source of some controversy both for its depiction of the English generally and of Prince Edward specifically. At the time of its release Gibson brushed off accusations of homophobia, essentially claiming that the audience was reading into the film, but I think that’s a disingenuous defence given how blatant it is (it also, of course, shifts blame onto the audience as if a director doesn’t make a series of choices in each scene which ultimately inform the way the audience can see a scene). There is an ugliness to this aspect of the film that I would like to think wouldn’t make it into a film made today – but that may be wishful thinking on my part. I don’t think that Braveheart is a film without value (the cinematography by John Toll is gorgeous, for one thing), but its flaws are so glaring that they can’t be ignored and the film can’t really rise above them.

Braveheart is a case of popularity over substance. I like it but Apollo 13 was a better film, and unfortunately that doesn't always mean it gets the awards it deserves.