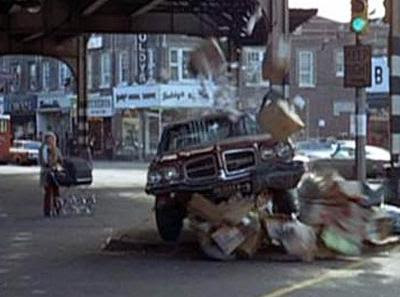 I've got to imagine that The French Connection played a lot differently in 1971 than it does now. I mean, in the first 15 minutes alone, we watch Popeye Doyle (Gene Hackman) help his partner kick the hell of a suspect they have in handcuffs and a couple of scenes later he releases this pearl of wisdom: "Never trust a nigger." And he's the hero! What a difference 40 years makes.

So, as I said, Doyle is our hero in this story, which gets going with him and his partner Russo (Roy Scheider) stumbling onto what they believe to be a major drug ring. At a bar they spot Sal Boca (Tony Lo Bianco) throwing money around like it grows on trees and become convinced that he's in on something nefarious. They begin a surveillance operation that confirms their suspicions, though their proof is never concrete. It isn't until Boca's partners - the eponymous French connection - tip their hand by trying to take Doyle out that the enormity of the situation becomes incontrovertibly obvious.

The story is constructed to work on two levels. On the one hand it's a police procedural film which takes great pains to show us how Doyle and Russo gather evidence, and on the other hand it's a psychological character study. Doyle is a very troubled character, a loose cannon whose part in the death of a fellow officer is frequently alluded to though never elaborated on. We're left to assume that his ends-justify-the-means attitude played some role in his colleague's death, an assumption justified by the film's final scenes in which he's so desperate to capture the French mastermind Alain Charnier (played by Spanish actor Fernando Rey) that he doesn't even given a second thought to who gets hurt in the process. He's so stuck on the idea of getting his man that he fails to see the situation as a whole or the consequences his actions have for other people.

I found the film more interesting when it focused on this aspect of the story, showing us just how messed up Doyle is. Hackman is good at expressing that Doyle is lost, his life empty except for his job. He needs his job because it's the only thing that gives his life any sense of structure or meaning, and he needs to bring the drug ring to justice in order to make people stop talking about that time when he wasn't so good at his job and someone died as a result. He's tortured by his past and needs to vindicate himself with this case to prove to everyone that he's a good cop because that professional identity is all he has. He's not a particularly nice character - he's racist, he's an alcoholic, he's extremely self-centered - but thanks largely to Hackman's nuanced performance he's not unsympathetic. We understand his drive even if we're sometimes appalled by his actions.

I know that The French Connection is a much loved film, but I have to say I was a little disappointed in it. The famous chase sequence is amazing, of course, and Hackman's performance is great and very deserving of the Oscar he won, but I felt that as a whole the film wasn't really all that special. Admittedly that might be because it influenced so many subsequent films and helped establish new tropes in the genre so that the things that might have been groundbreaking about it in 1971 just seem standard now and the film can't really be faulted for that. Still, there are a lot of films that influenced decades worth of other films that still manage to retain that magic something that made them worthy of reverence in the first place and I just didn't feel that with The French Connection. It's a good movie but not one that I can see myself revisiting with any degree of regularity.