The Performances: Annette Bening in The Kids Are All Right 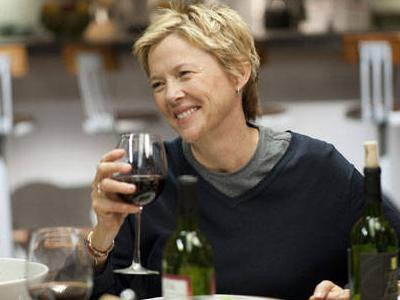 If Annette Bening's role in The Kids Are All Right consisted of just one scene, it would still be an award worthy performance. I'm talking, of course, about the scene in which Nic realizes that Jules has been having an affair with Paul and struggles to maintain her composure as the intensity of her emotions threaten to overwhelm her. It is an exquisitely played scene, plain and simple.

Fortunately there is more to the performance than just that one scene and Bening is consistently excellent throughout. Nic and Jules are established pretty quickly, both as characters and as a couple. Jules is the somewhat flighty one who is content to go with the flow; Nic is much more Type A, has high expectations and perhaps pushes people too hard. The difference between them is aptly explained when an exasperated Nic tells Jules, "If it were up to you the kids wouldn't even write thank you notes, they'd just send out good vibes." They're very different people in a lot of ways, which causes friction, but they also balance each other out. Bening and the sadly unnominated Moore work together extremely well and help paint a portrait of a relationship in all its complexities.

When the kids seek out Paul, the sperm donor both Nic and Jules used, both women have misgivings, but Nic in particular. She's threatened by Paul and what he represents, the idea that somehow the family she and Jules have created is lacking in legitimacy and can easily be usurped. As Paul becomes more and more involved in the lives of her children and her partner, Nic, who up until how has always the root of stablity, is suddenly thrown completely off balance. She does not always behave well but Bening brings out so many facets of the character that even when she's acting out, the depth of emotions at her core are apparent and we can empathize with her. She's not perfect and she's not always right, but that's what makes her so wonderfully human and Bening's performance flows in a very natural and emotionally engaging way.

Most of Bening's big scenes come after the big reveal - which occurs largely diaglogue free. Bening has another dialogue-less moment when Jules renders her speech about the difficulty of maintaining a relationship; her silent reaction to Moore's words are half of what make that speech so effective - but it's not just those big dramatic moments that matter. Right before the reveal there's that scene where Nic and Paul sing at the dinner table and it's terrific because it shows this whole other side to Nic that we hadn't seen before. There's something very brave about Bening's performance in that scene, as if Nic is truly opening up and being her real self - and then, of course, she's snapped shut, the pain and anger driving her back into her shell and behind that wall of aggression that's designed to keep people at arm's length. It's a quick turnaround but Bening guides the character through that arc brilliantly and never falters. All signs seem to be pointing to Natalie Portman this year, but I would absolutely love to see Bening take Best Actress. She's been a consistently marvellous actor for so long and she is richly deserving of an Oscar to call her own.