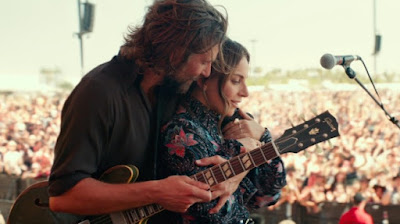 One of the most pleasant surprises so far this year is how good A Star is Born really is. I doubt many people would have expected that when the project was first announced, and when the studio released the trailer, which to my mind is one of the best trailers of the year, I don't know that most of us would have expected anything more than an okay movie with a really good trailer. So here it is and it's not only as good as its pre-release hype would suggest, it's as good as its tremendous post-release hype has been. I don't remember the last time that a non-Marvel, non-Star Wars movie prompted such a wealth of posts on pop culture sites, burning bright like a supernova of publicity. It's difficult to say that any movie could live up to this much chatter, but A Star is Born comes close enough. It's just a damn good movie; it really is.

This is, of course, the fourth version of A Star is Born and I feel confident in saying that at least part of the reason it's been so rapturously received is because it's somewhat fascinating to realize that a story that has been literally told three previous times (as opposed to the figurative sense in which most stories have been told before because they follow templates and accord with genre conventions) can still be so captivating. If you've seen any of the previous three versions - or, indeed, if you just know the story, because it's fundamentally the same each time - you won't be surprised by any part of the plot of this one, but that really doesn't matter. That thing that certain pieces of art possess, that ineffable something, flows through this movie. Maybe it's the skill of first-time director Bradley Cooper, maybe it's the luck of good timing. We're living in an emotional time, but the primary emotion of the age is anger. A Star is Born is pure melodrama, a nakedly emotional, deeply intimate film that invites you to feel happiness and sadness, euphoria and despair. It's cathartic as hell, is what I'm saying.

It opens with Jackson Maine (Cooper), who is already at the height of his stardom and the depths of his addiction to alcohol. Feeling wired after a performance, and having run out of booze in his limo, he has his driver pull over to a random bar so that he can get a drink, arriving just in time to see Ally (Lady Gaga) sing. He's enthralled and after spending what remains of the night hanging out with her, he insists on having her come to his next show. She's reluctant but then decides that whatever she has to lose, she doesn't mind losing, and goes to the show, where he brings her on stage with him to sing a song that she's written (that would be "Shallow," the performance of which is already the thing I'm most anticipating at the next Oscar ceremony). She's an instant hit, gets her own agent, records her own record, and theirs becomes a two star relationship. However her meteoric rise is coinciding with his increasingly rapid descent, placing a ticking clock on their relationship.

In all its versions, A Star is Born is the story of a woman who loves a man so much that she's willing to give up her dream to take care of him and of a man who loves a woman so much that he won't allow her to waste her talent while he loses his battle with his demons. In the first two films, in particular, the male protagonists achieve a sort of nobility with their final gesture because of the general sense that the female protagonists' sacrifice is something that they're ultimately entitled to. Society dictates that women are meant to stand by their men, that they should be ready and willing to give up their own desires in order to support him, so in removing themselves as obstacles to their wives' professional progress, the men achieve a kind of tragic heroism. A Star is Born is her story - quite literally, she is the "star" of the title - but it's him who becomes the object of the film's fascination.

This version takes a more complicated view, albeit in a way that is sometimes at odds with itself. On the one hand, this really is his story. Like the 1976 version (but not the 1937 or 1952 versions), he's the character that we meet first and in the language of cinema that's a silent indicator to the audience of who we're meant to identify with. Moreover, there's something solid in his identity, something the film considers worth exploring as it casts its eye towards his brother (Sam Elliott, who is absolutely brilliant) and the memory of their long dead father in its attempt to get to the root of who Jack is and why he's this way, that it doesn't necessarily feel for Ally, whose past the film doesn't consider worth exploring even though what we see suggests that there's a loss of her own there (specifically her mother) informing the how and why of who she is. So dimly does the film consider Ally (and women generally given that Ally is the only female character in the entire film, with other women appearing onscreen only occasionally to say a line or two and then disappear) that she doesn't even get a last name until the final scene, where she rebrands herself as "Ally Maine." When they meet for the first time and she addresses Jack as "Jackson Maine," he jokes that when you get famous people take to calling you by your full name. Yet even when she becomes famous, she is still just "Ally," as if that encapsulates the totality of her existence - and, of course, Ally the name is spelled the same way as "ally," as in someone who enters into a partnership with someone else to complete a certain task. He's the character and she's his ally, trying to help him do what he needs to do. When she's with him she has purpose, she does something "real." When she goes out on her own, she turns away from the "real" and starts making what is, in his opinion, empty pop music that doesn't actually mean anything, even if it brings her fame and awards.

But, on the other hand, Ally has more agency and is also a more self-determining character than the women in the previous films. While the women in the previous films are seemingly endlessly understanding and forgiving - even in the 1976 version where he cheats on her, she's already back to holding and kissing him all of a minute after finding him in bed with another woman - there are sharper edges to Ally. When he tries to castigate her for making pop music and tells her that she's "embarrassing," she reads him like a book, stating that he's embarrassed by himself for his increasingly out of control behavior and refusing to let him turn it around on her by accepting the premise that him feeling bad about himself is her fault. She demands that he own his behavior and recognize his self-loathing for what it actually is. She has, in fact, already "had it" before she even meets Jack, her first scene taking place in a ladies' room where she's on the phone with a boyfriend who thinks that her breaking up with him is merely the opening salvo in a negotiation. When she gets off the phone she unleashes a primal scream of "Men!" (or, rather, "Meeeeeeen!!!!") In this moment, and in more subtle moments like when she's fussing over her father (Andrew Dice Clay) at home, the film aligns itself with her, recognizing that she's been giving more than she receives in terms of emotional labor, a situation that doesn't in the least subside when she gets together with Jack. He might open doors for her professionally, but good lord is this man a mess, careening downhill in the expectation that someone (be it his brother or Ally) will break his fall.

While there's always been at least a touch of glamour to the tragic love story of A Star is Born, there's nothing pretty about Jack's addiction or the desperation and defeat at the heart of it. Cooper plays him like a man slowly drowning, buoyed only briefly by love, but ultimately too tired to keep treading water. It's a great performance that is more than what seems, at first, like it's going to be an imitation of Kris Kristofferson's performance from 1976. Even better than the performance is his direction, which manages to give the film both sweep and intimacy, like a small, personal story told on a grand scale, and which coaxes a performance out of Gaga that feels revelatory. In real life she's been a star for about a decade, but she's believable here as a nobody who knows that she's talented but has sort of given up on the idea of "making it" after so much rejection. She's as good in the small moments as she is in big moments of the musical performances and A Star is Born lives and dies in those quieter moments between its two stars, where they subtly forge the deep bond that the story's success relies on. A Star is Born is one of those films where all the stars align just right; it's a beautiful, deeply-felt movie.
Posted by Norma Desmond at 9:48 PM