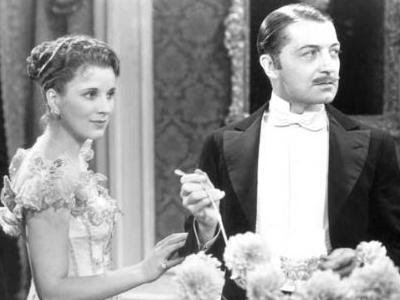 The 20th Century was not for the faint of heart, as demonstrated by Frank Lloyd's film version of Cavalcade, based on a play by Noel Coward. Spanning from New Year's Eve 1899 to New Year's Eve 1933, it follows the Marryot family as they endure the various wars and disasters that the first 33 years of the century throws at them and try, desperately, to hold it together. The only question is, at what point does this cease to be a "story" and become simply a list of events?

December 31, 1899 seems full of promise, as the 20th century dawns on the world and the London-based Marryot family, headed up by Robert (Clive Brook) and Jane (Diana Wynyard). The couple has two sons - Joe and Edward - who are just children in 1899. Both boys will eventually be lost - Edward will die on the Titanic, Joe will be killed during World War I - which of course bears heavily on their parents, but seems to be especially hard on Jane, who absorbs the major events presented in the story likes blows. She seems almost broken as the film comes to its end, though it does attempt to find a note of optimism.

As a contrast to the Marryots the film also shows the Bridges, Ellen (Una O'Connor) and Alfred (Herbert Mundin), who work as servants for the family before branching out to open their own shop. They also endure hardships - like Robert, Alfred goes off to fight in the Second Boer War, and later the Bridges' daughter becomes engaged to Joe - but are not portrayed in nearly as sympathetic a light as their employers. The noble Marryots are seen as tragic victims of events, whereas the social climbing Bridges are depicted as being coarse, their rise in the world (not that they get terribly far) as another sign that everything is going to hell.

Cavalcade uses historical events as guideposts for its story, a strategy which certainly could work but ultimately doesn't as it is employed here. The characters never become developed enough that we really care about them or how the cultural shifts affect them; instead the screenplay puts all its effort into getting from one major event to the next, bending the characters to fit into events rather than using the events as backdrops to illuminate different facets of the characters. The result is a film that feels rather soulless and so the film's final scene lacks the impact that it might otherwise have had.

The actors do the best they can and occasionally manage to trascend the stilted nature of the dialogue and too rigid construction of the story. Wynyard, in particular, has some great moments, such as after she learns that her younger son has been killed and the film shows her wandering through the street amid throngs of people in the midst of celebration, but moments like this are few and far between. The film has little interest in the characters as people, in making the characters into people, and so as an audience we have little opportunity to connect with them and can't feel particularly moved by their plight as the film draws to a close. Cavalcade is interesting as a document of conservative panic regarding the loosening up of social and class mores (there is a sly suggestion that open homosexuality has been one of the results of the series of traumas experienced by the world), but it isn't a very good movie.