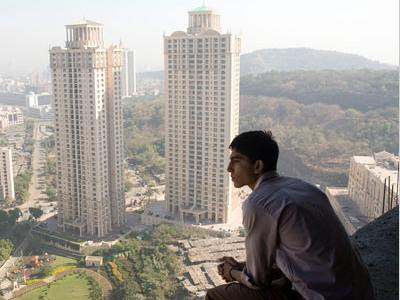 Slumdog Millionaire begins with scenes of torture, traces a life full of poverty and brutality, and arrives at an ending that is incredibly uplifting. That is the magic of the film that launched Danny Boyle into the mainstream and brought home a boatload of Oscars. It is a film that finds just the right mix of darkness and light, horror and triumph. It is a Dickensian tale of rags to riches, of a young man who succeeds against all odds at becoming “the hero of [his] own life.”

The story is split up into two threads which will eventually merge. In the present day Jamal (Dev Patel) is a contestant on Who Wants To Be A Millionaire and subjected to viciousious questioning by the police on suspicion that he’s cheated his way to the million dollar question. As they go through the questions he’s been asked, he explains how he knew the answers, relating the story of his life in the process. This method of storytelling isn’t particularly groundbreaking but Boyle breathes life into it, running many of the flashback scenes at a frenetic pace and a sometimes startling intensity. The present day scenes act not only to break up the story into digestible pieces, but also offer the opportunity to catch your breath.

Jamal has had a hard life. Orphaned at a young age, he and his brother, Salim, live a vagabond lifestyle, having various adventures as they try to survive and make a place for themselves in the world. Latika (played as an adult by Freida Pinto), a fellow orphan, becomes a point of contention between the brothers and the driving force in Jamal’s life. She proves elusive to Jamal, always, somehow, slipping through his fingers. The older they grow, the further away from him Latika seems to drift and Boyle consistently films her to emphasize that distance and the mirage-like facet of her being, showing her reflected in mirrors, through glass which distorts her image – she’s more dream than reality for Jamal.

Though the fairytale romance – with Jamal cast as the pauper turned prince and Latika as the captive princess – is the thematic element that gives shape to the narrative, underneath the romantic sheen is the harsher reality. The film never looks away from the poverty which surrounds Jamal and the very ordinariness of children playing (and living) in heaps of garbage makes it all the more jarring. As Jamal grows and Bombay becomes Mumbai and globalization takes hold, transforming the skyline with big, modern buildings, the poverty remains. When Jamal and Salim meet again as adults at the top of a building under construction, Salim points to an area of the city below them and states that their slum used to be there. It’s a business district now, a sign of progress sweeping through the city – but with all this progress the people at the lowest echelons of society haven’t been raised out of poverty, they’ve just been moved further to the fringes. Things are just as bad as they’ve ever been; you just have to look for it in a different place now.

This movie reminds me somewhat of Fernando Meirelles’ brilliant City of God - though Slumdog is about ten times less depressing, perhaps because its ending is less realistic. The optimism of the film’s conclusion works, though, because rather than deriving from material gains (Jamal never seems like he cares much about the money), it stems from the connection between one human being and another, which has no monetary value and which I think everyone can relate to on some level. It’s a fantastical story, but also very human and that’s what makes it so powerful.

Danny boyle..one of the premium film makers of our generation...can this man do any wrong!!

So far so good!

This is a great book. I don't read as much fiction these days, but the movie made me curious. The book is better in several ways. The movie changed lots of details while retaining the spirit of the book. The book's details are more successful in my opinion, and one particular incident is handled in a most ingenious way in the book, while it was more blunt in the movie. The movie was more intense in some ways, but the book is wiser in what it chooses NOT to show. I was completely delighted with this story. It is funny and heroic and romantic and bold. The culture it describes in such places as Mumbai and Delhi is fascinating. A terrific read with memorable characters.