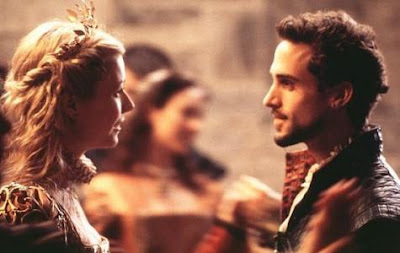 What I am about to say, I know, will put me at odds with many film connoisseurs: I fully believe that Shakespeare In Love’s win for Best Picture was appropriate and deserved. Feel free to take a moment and let that sink in. John Madden’s romantic comedy is a delightful, intelligently written, and elegantly wrought film that reaches heights attained by few comedies. Lightweight? Perhaps. But a beautiful film nevertheless.

Joseph Fiennes stars as William Shakespeare who, at the beginning of the film, has been working on a play titled “Romeo and Ethel, the Pirate’s Daughter.” The play is incomplete, Will having come down with a nasty case of writer’s block after discovering that his muse has been seeing another man, but auditions begin nevertheless, in part because the theatre manager, Philip Henslowe (Geoffrey Rush), is under pressure to pay off some debts. The actor who wins the lead role is Thomas Kent, who is secretly the wealthy Viola de Lesseps (Gwyneth Paltrow) in disguise. Since women are not allowed on the stage, Viola must play a role in order to be able to play the role.

Will eventually discovers the truth about Thomas and he and Viola begin a romance, the developments in their relationship echoed in the play, which slowly becomes “Romeo and Juliet” and transforms from a comedy into a tragedy. Like Romeo and Juliet, Will and Viola are not meant to be: he is already married, though estranged from his wife, and Viola is engaged to Lord Wessex (Colin Firth), who has made a wager with Will over whether or not the play can accurately capture the nature of true love. Will wins the bet (with some help from Queen Elizabeth, played by Judi Dench, who was witness to the wager), but loses Viola, who leaves with Wessex for Virginia after the play’s performance but not before providing him with the inspiration for his next play: “Twelfth Night.”

Written by Tom Stoppard, the playwright behind Rosencrantz and Guildenstern Are Dead, Arcadia, and The Real Thing, and Marc Norman, Shakespeare In Love boasts an intelligently written screenplay both in terms of the wit of the dialogue and in terms of the story’s construction. It obviously borrows very freely from Shakespeare, referencing not only “Romeo and Juliet” and “Twelfth Night” but also many of his other plays as well as his sonnets, but it also unfolds its story according to many of the tropes of the backstage Hollywood drama, giving this period film a distinctly modern feel. A lot of the time films about the backstage goings on of moviemaking ultimately don’t work (or don’t entirely work) because there’s an element to them that’s simply too closed off to the audience, a sense of inside jokes that are being referenced but not completely shared; Shakespeare In Love gets around this obstacle through its setting, which helps to balance out the very specific and inside nature of much of the film’s humour.

The film is anchored by two charming performances from Fiennes and Paltrow, who are surrounded by terrific supporting performances, most prominently from Rush and Dench, but there are also small roles played by Imelda Staunton, Tom Wilkinson, Rupert Everett, and Ben Affleck. There is a wealth of great performances (some more demanding than others) here and they all work together in harmony, creating a communal feeling amongst the players that helps set the tone for the story as a whole.

This movie will always be in my memories! Gwenyth Paltrow was absolutely beautiful in this movie. Her leading partner was not too shabby himself. This is one of the best romantic movies I have ever seen.