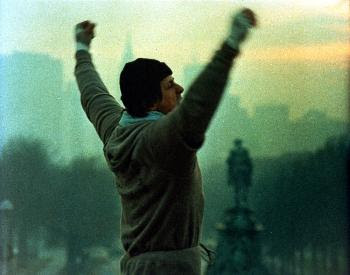 After 35 years and 5 milk-it-dry sequels, it can be easy to forget what was so compelling about the original Rocky in the first place. This scrappy, crowd-pleasing film struck a chord with audiences and critics alike (even the notoriously prickly Paulina Kael liked it), propelling it to over $225 million at the domestic box office and 10 Oscar nominations (of which it would win 3). It’s arguably not as strong as All The President’s Men, Network or Taxi Driver, three of the other films nominated for Best Picture that year, but there is something about it that resonates.

Sylvester Stallone plays the eponymous character, a small-time boxer waiting for his big break. That big break comes when heavyweight champ Apollo Creed (Carl Weathers) has the idea to fight a lesser known boxer after his original opponent for the Heavyweight Championship suffers an injury. Rocky is selected because Apollo likes his nickname (“The Italian Stallion”) and he begins training with former boxer and current gym owner Mickey Goldmill (Burgess Meredith). Meanwhile, Rocky also begins dating Adrian (Talia Shire), the sister of Rocky’s friend Paulie (Burt Young), whose job in a meat packing plant makes possible one of Rocky’s most iconic moments, when Rocky uses the carcasses in the freezer to train.

By the time the match comes around, Rocky is ready – not hoping to beat Apollo, simply hoping that he can go the distance with him by lasting 15 rounds. As the fight begins Rocky quickly gains some ground, surprising everyone but particularly Apollo, who hadn’t really been taking the fight very seriously. After 15 punishing rounds, both Rocky and Apollo are still standing, though both are exhausted and have suffered numerous injuries. “Ain’t gonna be no re-match,” Apollo declares, hilariously in hindsight since that’s the whole premise of Rocky II. The ending is fairly well-known by now: Apollo wins the fight in a split decision and Rocky, his face swollen and bloody, bellows for Adrian, who climbs into the ring to embrace him. Neither cares about the result of the fight; it’s their love for each other than matters.

Rocky is one of those films that is almost eclipsed by its “making of” story, which is perhaps even more compelling and unlikely. Stallone wrote the screenplay and refused to sell it unless he could star as Rocky, and the film was subsequently shot in 28 days on a shoestring budget. It became the highest grossing film of 1976 and launched Stallone into stardom, though he has yet to make another film to match Rocky’s critical success.

Rocky is, in certain respects, an old-fashioned movie with a rags to riches (or perhaps rags to nicer rags) story that could have come straight out of Hollywood’s golden age. It has an easy appeal that stems not only from its underdog story but from the sweetness at the film’s core. That sweetness comes from Rocky’s relationship with Adrian, which unfolds with a level of care and attention that is rare in the testosterone-heavy arena of sports movies. The combination of Rocky, who is a rather colourful character, with Adrian, who is a very quiet character, works well and Stallone and Shire bring out the best in each other in all their scenes. Both would receive Oscar nominations for their performances, as would Meredith and Young. Despite the film being named after its main character, this is really an ensemble piece that requires the perfect combination of actors and characters to make it work. Rocky finds that combination and the way that the characters are drawn and interact with each other that helps the film rise above its more generic plot elements. Through its characters Rocky taps into something very genuine and very human, which is why it continues to resonate.