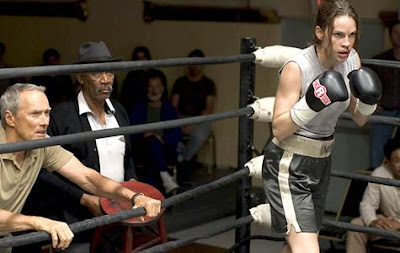 This post was contributed by CS who writes the blog Big Thoughts From A Small Mind. Get over there and check it out!

Directed by Clint Eastwood, and written by Paul Haggis, Million Dollar Baby is a tale of a waitress, Maggie (Hilary Swank), who decides to pursue her dreams of becoming a professional boxer at age 31. In order to fulfil her dream, Maggie knows she needs a trainer so she turns to former trainer, and current gym owner, Frankie Dunn (Eastwood). Frankie was one of the best trainers in his time, but now spends most of his time filled with regret about how things turned out between him and his estranged daughter. Frankie’s only friend is Scrap (Morgan Freeman), a former boxer who fell on hard times and is now working as a janitor in Frankie’s gym. With the assistance of Scrap, Maggie eventually gets Frankie to break his “I don’t train girls” policy and become her trainer. As the unlikely pair start to make their way around the boxing circuit, Maggie’s star begins to rise. This forces the normally overcautious Frankie, to take a risk and get Maggie that a shot against Billie “The Blue Bear”(Lucia Riker). Billie is one of the dirtiest fighters on the circuit and will do anything to protect her title. With momentum in their favour, Frankie and Maggie know that this fight could possibly change their lives.

It has been five years since I last watched my DVD copy of Million Dollar Baby. I was both excited and a little hesitant to revisit it as sometimes our memories of the experience are greater than the film themselves. One element that was prominent this time around was how annoying Freeman’s constant narration is. Rarely do scenes play out on their own without the narrator chiming in to express the significance of the moment. It is almost as if Haggis and Eastwood are afraid to let the dialogue and images speak for themselves. This inadvertently results in the film underestimating the overall intelligence of its audience. While the last few scenes are designed to show the importance of Freeman’s narration, it is hard to believe that the person the narrator is actually speaking to would be interested in the side story at the gym involving Danger Bach (Jay Baruchel), Shawrelle Berry (Antony Mackie), and Omar (Michael Pena). While I think their side story, and the one involving Maggie’s family, are needed in the film; they would have the same impact without the assistance of the narrator.

My issues with the narrator aside, I found myself still falling for the film despite knowing what was going to happen. Million Dollar Baby is in reality two films in one. The first half is a rags-to-riches style boxing tale in which a self-proclaimed white trash girl and her crotchety trainer learn defy the odds. Like many other odd couple films, they have their ups and downs on the way to gaining mutual respect for one another. The second half is where the true heart of the film is. It is here where the film moves from a simple boxing film to a tale about morality, and family. The film looks at issues regarding euthanasia, atoning for past sins, and spirituality. It is hard to think of Million Dollar Baby without immediately focusing on the latter part of the film.

Clint Eastwood does a good job of juggling both the heavier moments with the comedic ones. He never ventures into the realm of slapstick despite coming close on a few occasions with the character Danger. The boxing scenes are well done and they never feel false. I liked how Eastwood slowly gives Maggie a cocky swagger as her wins increase. This offers a nice build up to her match with the menacing beast that is Billie. Overall Eastwood’s direction is sound and I would argue far better than his performance in the film. This is not to say that Eastwood is bad, in fact he is quite good, but after seeing his grumpy old man act in Gran Torino, it does not have the same humorous effect in Million Dollar Baby as it did when I first saw the film. Hilary Swank is brilliant in the film and well deserving of her Academy Award win for Best Actress. Swank shows both Maggie’s tough side and her fragile side, she has the audience laughing one minute and crying the next. While Maggie and Frankie are supposed to be the odd couple of the film, it is actually Frankie and Scrap who perfect this. Eastwood and Freeman carry over the great chemistry they had in Unforgiven into this film. Freeman is especially good as the man who, though blind in one eye, can see what is truly occurring far better than anyone else in the film.

Although six years has passed since its original release, Million Dollar Baby is aging very well. With the exception of the narration, the story still delivers an emotionally charged tale. The performances from the ensemble cast are great and the mixture of drama and humour help this film to retain its high re-watch value.