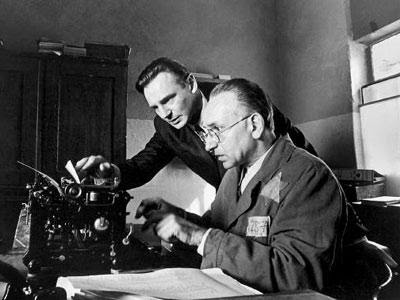 Schindler’s List is one of the heaviest films ever made, weighed down with an inescapable sense of grief, anger and regret, but ending on a note of bitter-sweet triumph. If you can make it to the end of the film, when it transitions from narrative fiction to documentary, without crying, I commend you on your willpower. Personally, I can’t even think about it without my eyes misting up. This isn’t just a good movie, but an important one. It is unflinching and powerful as it puts names and faces to the Holocaust, a word that is itself massive with meaning and something of which it is easy to think in monolithic terms, rather than in terms of individual people.

The film follows Oskar Schindler (Liam Neeson), who plays at being a Nazi collaborator in order to hide the fact that he’s saving Jews from the Nazi killing machine. However, Schindler is no cardboard hero. His primary motivation at the beginning is to make money where he sees an opportunity. It is only later, as he has gotten to know some of the Jews working for him, particularly Itzhak Stern (Ben Kingsley), that his motivation shifts to saving lives. He plays a cat-and-mouse game with the Nazis, pretending to be loyal, pretending to be doing work for them, when in actuality he’s working against them. “If this factory ever produces a shell that can actually be fired, I’ll be very unhappy,” he tells Stern.

In contrast to Oskar, the film produces Amon Goeth (Ralph Fiennes), a sadistic SS officer who kills the inmates of Auschwitz randomly, in one scene firing at them with a rifle from a balcony. There are moments when he seems almost human, when the common thread of humanity seems not to have been cut from him, but these moments are brief and, snapping back from them, he becomes worse than he was before. Take, for instance, a scene between him and Helen (Embeth Davidtz), one of the women in the camp. “I would like to reach out to you and touch you in your loneliness,” he says, carrying on in a way that makes it clear that there is conflict between his attraction to her and his Nazi ideals, before finally concluding with, “No, I don’t think so. You Jewish bitch, you nearly talked me into it, didn’t you?” Goeth is a point of reference, a way of understanding how something like this could ever have happened. Whatever good ever existed in him is buried under so much hate - some of it natural, some of it incited and inflamed by vile ideology - that it will never see the light of day again, and his hate is expressed in random, unpredictable ways. “There are no set rules you can live by, you cannot say to yourself ‘If I follow these rules, I will be safe,’” Helen tells Schindler of Goeth. He hurts not as punishment, but for the sake of hurting, because he has been granted that power.

But if Goeth is a character of condemnation, so too is Schindler, in a way. What is condemned through Schindler is not the sadism of Nazi ideology, but the failure to dismantle it before millions of innocent people could be murdered. If Schindler – one man – could save eleven hundred people from death while working right under the nose of the Nazi party, imagine how many could have been saved had there been ten more like him, one hundred, an entire nation, the entire world. The character of Schindler is a condemnation of the wilful ignorance of the rest of the world with regards to the Holocaust. The girl in the red coat provides the same function. The red of her coat symbolizes not just the blood of the Jewish people but also the voluntary blindfolds donned by the rest of the world. In a black and white film, the red coat stands out, it is unmistakeable, just as the rounding up of Jews in nations under Nazi rule was unmistakeable, was known, and was ignored.

Schindler's List is a memorial for those lost in the Holocaust, but its impact isn't merely emotional. Laying aside the story, this is a very strong film on a purely technical level. Shooting in a documentary style, Steven Spielberg deliberately limited what he brought in his director’s bag of tricks. There are no crane shots here, no zooms; it is shot in a simple style, largely with handheld cameras. In doing this, Spielberg gives the film the intimacy necessary to really tell this story. His stripped-down direction is aided in no small part by the cinematography of Janusz Kaminski and the score by John Williams and Itzhak Perlman. This isn’t a flashy, bombastic film, and it doesn’t need to be. Spielberg’s knowledge of and trust in that is one of the film’s greatest assets.

Schindler’s List will break your heart, but it will also lift your spirit. In the final moments, a title card informs us: “There are fewer than 4000 Jews left alive in Poland today. There are more than 6000 descendants of the Schindler Jews.” 6000. Amazing what one person can do.