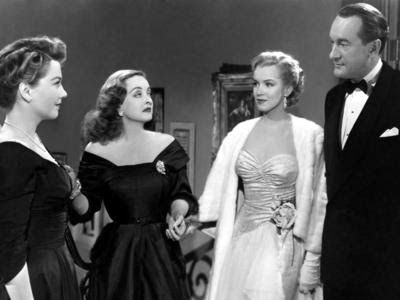 The general consensus seems to be that Sunset Boulevard is the superior film, but I’ve got to give the edge to All About Eve. This is a film that is perfect from top to bottom, never missing a beat, never making a false step. It contains perhaps the best ever marriage of actor to character in Bette Davis’ portrayal of Margo Channing, and it is built upon one of the best (and most quotable) screenplays ever written. So fasten your seatbelts…

We never have to wonder whether Eve Harrington (Anne Baxter) will succeed in her climb to the top because the film begins with her moment of triumph, as she’s awarded with the Sarah Siddons Award for Distinguished Achievement. We get a quick look at all of the people she climbed over to get to this point – Margo, Bill (Gary Merrill), Lloyd (Hugh Marlowe) and his wife, Karen (Celeste Holm) – and then the film doubles back to the beginning, when Eve is a star-struck girl given the opportunity to meet her idol, Margo Channing. Soon, she’s Margo’s assistant, with whom Margo is initially enthralled before becoming suspicious. Eve’s true intentions – to usurp Margo – eventually become crystal clear, but by that time it’s too late and Eve, with the help of theatre critic Addison DeWitt (the extraordinary George Sanders), has firmly established herself. But, ultimately, it’s Margo who has the last laugh, deciding to let go of the ingénue roles she’s too old for anyway and settle down with Bill, while Eve now has her own problems in the form of the controlling Addison and her own “biggest fan.”

Much of the film is concerned with the brief shelf-life of actresses who, regardless of how gifted they may be, rarely get to enjoy careers as lengthy as those of their male counterparts. Margo is a great star who can get away with playing roles she’s too old for by virtue of the fact that she is a great star. However, even her supporters are beginning to waver. Lloyd, the play write, confesses to Karen that he wishes his next character could be played by someone young enough to properly embody her, which Karen thinks is a betrayal of Margo, who has essentially made Lloyd’s career by starring in so many of his plays. But Margo is well-aware that that is how the game is played, that actresses are disposable once they reach a certain point. Her anxieties about growing older generally are underscored by her relationship with Bill, who is younger than her. “Bill’s thirty-two. He looks thirty-two. He looked it five years ago, he’ll look it twenty years from now. I hate men.” Many of the film’s best lines either allude to or directly confront the subject of age and generally come from Margo after she’s realized what Eve is up to.

The acting in the film is uniformly excellent, with special mention being reserved for Davis and Sanders. To call this a tour-de-force on the part of Davis is an understatement. This is a real “mask off” performance, cutting right to the heart of a matter that was, no doubt, on Davis’ mind in real-life as well. Her assertion that “it’s going to be a bumpy night” has transcended the film to become part of pop culture, but what happens next is even more memorable, as Margo becomes increasingly distraught about Eve and all the issues she raises and proceeds to get spectacularly drunk at a party she’s thrown for Bill. What we see in this sequence is a miniature version of what we’ll see play out in the film as a whole in terms of Margo’s character. She’s alternately bitchy, wounded, vulnerable, happy and sad, and the way that Davis transitions from one to the other is seamless.

As Addison, Sanders is a force to be reckoned with, especially as the story draws to a close and he tightens his grip on Eve. When she attempts to free herself of his grasp, he responds with shock. “Is it possible, is it even conceivable, that you’ve confused me with that gang of backward children you play tricks on?” he asks before laying down the law with her once and for all. No matter how you feel about Eve, it’s difficult not to feel sorry for her when she realizes that she’s unwittingly signed herself over to a life of servitude to the cold-blooded and ruthless Addison, who can’t be manipulated because what he wants isn’t her as much as it is control of her.

There is a lot of debate about whether or not the film has gay undertones, much of it surrounding the characters of Addison and Eve. I think the evidence regarding Addison is scanty – he’s witty and dresses smartly, but he also looks at Miss Casswell (Marilyn Monroe in a brief but memorable turn) in a distinctly unplatonic way – but there’s some credence to seeing Eve in this way. Certainly in a story like this, which hinges on one person’s intense adulation/obsession with another, there’s going to be some underlying sexual element to the way it plays out. With Eve in particular, I don’t think it’s much of a reach to suggest that the fluidity of her character extends to her sexuality. Would Eve have slept with Margo to get ahead? Without hesitation, I would have to say yes. And the way she relates to her own fan at the end lends some plausibility to the reading of Eve as a lesbian. Ultimately, however, I think the character is sexually ambivalent, using sex not as a way of getting pleasure, but as a way of gaining control. Eve is whoever she needs to be in any given situation – inside or outside of the bedroom.

On the strength of its performances, All About Eve is probably considered more of an “actor’s picture” than anything else, but it is essential to mention the work of Joseph L. Mankiewicz, the film’s writer and director. With Eve Mankiewicz created one of the most entertaining films ever made, gave the legendary Davis the best character she ever played and achieved something that very few filmmakers or films can lay claim to: absolute flawlessness.