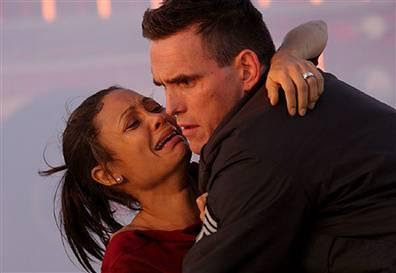 “It’s the sense of touch. In any real city, you walk, you know? You brush past people, people bump into you. In LA, nobody touches you. We’re always behind this metal and glass. I think we miss that touch so much, that we crash into each other, just so we can feel something.” These first lines of Crash should tell you everything you need to know about the level of subtlety that writer/director Paul Haggis is working with in this story. Crash means well, of course but its rather simplistic view of volatile race relations in Los Angeles often feels more like it wants to teach important lessons than tell a good story.

Crash takes its structure from multiple storylines that ultimately intersect (or crash into each other). The various threads follow Graham (Don Cheadle), a police detective, and his partner/girlfriend Ria (Jennifer Esposito); Rick (Brendan Fraser) and Jean (Sandra Bullock), an affluent couple deeply affected by a carjacking; the carjackers, Anthony (Ludacris) and Peter (Larenz Tate); the locksmith (Michael Pena) hired to change the locks in the rich couple’s house; Cameron (Terrence Howard), a movie director, and his wife Christine (Thandie Newton); and John (Matt Dillon), a police officer and his rookie partner, Tom (Ryan Phillippe).

The film takes pains to show how all of these characters are affected by, and help perpetuate, racism and prejudice. The worst offender is John, who unleashes his anger both verbally and physically. After getting into a confrontation with an insurance agent over the phone, he takes his frustrations out on Cameron and Christine, who have been pulled over. He humiliates them – and Tom – by sexually assaulting Christine under the guise of performing a pat-down and then sends them on their way. This act ultimately drives a wedge between Christine and Cameron and between John and Tom, who attempts to make a formal complaint and is shot down by his superior, who informs him that he and Tom would lose their jobs, rather than John losing his. “Look at me. Wait ‘til you’ve been doing it a little longer,” John tells Tom by way of justification for his actions. Later, Tom’s own prejudices will be challenged when he picks up a hitchhiker – who happens to be Peter – and a misunderstanding leads to tragedy and a subsequent cover up. Meanwhile, John and Christine come back into each other’s orbit when he rescues her from a burning car.

John is simultaneously the worst and best character in the film. He’s the worst because of who he is as a person, but the best because he’s one of the most fully rounded and complex characters in the film. He’s a person born into a certain degree of privilege simply by virtue of his race and sex, but he lives in a time in which there are policies in place designed to aid those who don’t have such privilege. These policies don’t actually oppress him but he perceives them that way and therefore every slight he experiences is magnified and he acts out in order to reassert the dominance he feels entitled to. The irony, of course, is that the only reason he can assert dominance is because he’s already occupying a position of dominance. He is not a nice man, but the film does manage to show him as more than just the sum of his capacity to hate and though his big moment of redemption (when he rescues Christine) is perhaps a bit easy, it is ultimately effective.

There are a few effective moments scattered throughout the film but, on the whole, it isn’t half as profound as it plays at being. It explores its themes in very broad and simplistic terms and doesn’t particularly challenge the audience at any point. The acting is very good, sometimes transcending the rather didactic tone of the dialogue, but that doesn’t alter how artificial the whole thing feels. Crash is undoubtedly a well-meaning film but everything plays out on such a superficial, obvious level that it doesn’t really have a lasting impact. There’s nothing here that hasn’t been said, and better, by other films going back decades.

This is another fine film to add to your 100 reviews! I saw this in 2005 on the big screen and it is the only time I've seen it. It had an impact on me in the quiet way it dealt with rascism. Sure there may be better films on the subjet but Crash doesn't batter you emotionally into submission getting its message across.
I would call it emotionally engaging, not emotionally harrowing. The subtley of its delivery is what made me sit up and take notice. Beleive me it was a film that made me uncomfortable and squirm in my seat.
I find a good film stays with me well after I have seen it. You think about it, recall it many days, months, even years later. Crash does that for me.

I like your review a lot. "Crash" is one of those Best Picture winners that divides people. It gets ragged on a lot.

Truth is, it isn't the deepest treatment on the topic of racism. It's not the most inventive or impressive "intertwining stories" story.

You do a very solid job of highlighting its good points while describing exactly why this film is so divisive. It is quite superficial, exactly as you describe. I also found a few moments to be very predictable - in particular, one moment involving a shop owner. If you know what I'm referring to, that scene seemed emotionally manipulative, but also telegraphed.

Regardless, I can still see why the academy liked "Crash" enough for it to get the win. Nice job!

this is one of my favorite films. very well done, well acted and well told.