The Best Picture Countdown #30: The Bridge on the River Kwai 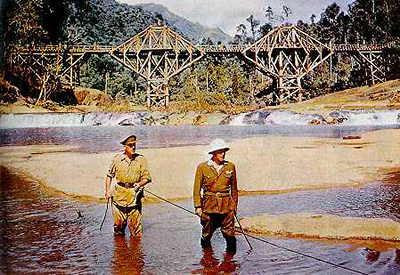 The Bridge on the River Kwai takes place during World War II, but it’s a war film in only the broadest of terms. This is a psychological film, a battle of wills between two men from different sides of the war who are equally proud and equally determined to be an example to their countrymen. On the British side is Col. Nicholson (Alec Guinness), on the Japanese side is Col. Saito (Sessue Hayakawa), and they find themselves united in their obsession with building a bridge across the river Kwai.

The film opens famously with the British soldiers marching into the P.O.W. camp whistling the “Colonel Bogey March.” They are met by Saito and it becomes immediately apparent that he and Nicholson are going to clash. Nicholson, a life-long military man, clings to the sanctioned rules of warfare and attempts to impose them on Saito, whom he assumes is simply unaware of them. “Do not speak to me of rules,” Saito replies. “This is war! This is not a game of cricket!” The two are deadlocked. Nicholson is tortured in an attempt to break him and thereby break his men, but instead he endures and it’s Saito who must give in, agreeing that officers will not be compelled to participate in forced labour. With that out of the way, Nicholson goes about his next task, which is organizing the building of the bridge. He is shocked to find that his men have been sabotaging the effort in his absence and rectifies it, believing that the honest effort of building the bridge will be good for morale. “One day the war will be over and I hope that the people that use this bridge in years to come will remember how it was built and who built it. Not a gang of slaves, but soldiers, British soldiers,” Nicholson says. And while keeping up morale by giving the prisoners a chance to achieve and take pride in something is all well and good, as Major Clipton (James Donald) points out it also means collaborating with Britain’s sworn enemy. If the bridge is built – and built well – it will be used against Britain and the rest of the Allies, a fact which is lost on Nicholson in his determination to create a monument to British mastery.

As Nicholson and the British continue to build the bridge, Saito begins to come undone. In one scene he sits alone crying, unable to cope with the fact that Nicholson can build a better bridge than he ever could have hoped of doing himself. Saito isn’t a career soldier like Nicholson and slowly renounces his authority to the other man. In one exchange Nicholson lays out the necessities for finishing the bridge on time, which includes using some of the Japanese soldiers as labourers. “I have already given the order,” Saito says. Nicholson then suggests laying out a work quota for the Japanese soldiers. “I have already given out the order.” Saito is effectively broken at a time when he should be triumphant. The bridge will be finished and he won’t have to commit suicide in order to preserve his honour, but it’s spoiled because he has to rely on Nicholson’s knowledge and willpower to get it done. Guinness is wonderful as Nicholson and won the Academy Award for Best Actor, but Hayakawa (who was nominated as Supporting Actor) is more than equal to him, bringing a depth of humanity to the role that the film would have suffered without.

While Nicholson and Saito engage in their battle of wills, there’s another plot running through the film, that of the American P.O.W Shears (William Holden). Shears escapes through the jungle and spends time lounging on beaches with British nurses before being persuaded to return to the jungle to sabotage the bridge. I’ve always found this plotline rather unnecessary and the character of Shears ill-defined. He’s not really motivated by anything except what the plot requires him to be motivated by at any given moment. And while it’s true that Shears and his team bring about the film’s resolution, in that they provide the means for the bridge to blow up, it just seems like they belong in a different movie than the one about Nicholson, Saito and their shared, mad dream.

And mad is the only word for it. “Madness! Madness!” These last words are uttered by Clipton who still can’t believe that Nicholson doesn’t realize what he's done. Of course, what he doesn’t know – but we do – is that Nicholson does realize what the bridge means. “What have I done?” he asks then falls dead, landing on the detonator which blows up the bridge. In his last moment, he is redeemed, but what was the cost of his journey towards redemption? He and Saito are both dead, so is Shears, and the bridge, dedicated with a plaque to tribute the work of the British soldiers, is destroyed.

This one of those classic films that I hear mentioned a lot but never got around to seeing it. I might have to change that this year.

I highly recommend it. It's totally engrossing.