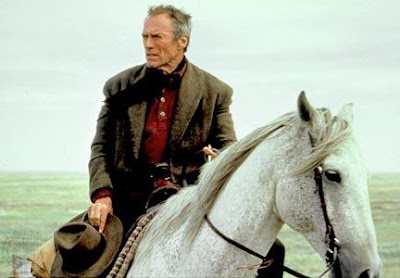 “I ain’t like that no more,” Bill Munny insists, though every turn takes him closer and closer to that man he used to be. Unforgiven is, indeed, an unforgiving film, dark and brutal, unromanticized and demystifying. It tells the story of a man who was once bad but has since tried to be good, of women fighting against their status as property, and of the “Wild West” making its final transition from reality to legend.

In a small outpost a man attacks a prostitute, cutting her face up to bits. The law in town is unofficial but absolute, headed up by Little Bill (Gene Hackman), who rules with an iron fist. The prostitutes, led by Strawberry Alice (Frances Fisher), want the attacker and his friend hanged, but their wishes aren't exactly taken into consideration. When the brothel's owner suggests that he’s willing to settle for monetary reimbursement, Bill tells the men that they can walk away without so much as a whipping provided that they give the brothel owner six horses. Strawberry Alice is furious. “We may be whores, but we ain’t horses,” she says before proceeding to rally the other women to pool their money and hire a bounty hunter to exact revenge on the two men.

A young gunslinger who calls himself the Schofield Kid (Jamiz Woolvett) gets word of the bounty and goes out in search of Munny, hoping to form a partnership. The Munny he finds, however, is not the man of legend, but a widower living with his two children on a pig farm. He declines the offer, insisting that he’s out of the outlaw life, the love of his late wife having changed him and set him on the right path. After the Kid leaves, however, Munny begins to think it over and decides that the promise of money is too strong to keep him away. He seeks out his former partner, Ned (Morgan Freeman) and they set off after the Kid, whom they quickly realize isn’t quite as adept a gunslinger as he’d like to suggest – but, of course, Munny himself isn’t so adept anymore either. Before setting off, he practices his shooting, setting up a tin can on a post and missing every time until he swaps in a shotgun that couldn’t possibly miss. His first attempt at riding a horse after so many years is similarly pathetic and for a while it seems as if the film will be more comedy than drama. That all changes as soon as they arrive at the outpost and Munny has his first run-in with Little Bill, who beats him and tells him to get out of town.

Earlier in the film Little Bill had done the same to English Bob (Richard Harris) and, in beating and exiling him, inherited his biographer (Saul Rubinek), who dutifully records all his thoughts and stories and actions for posterity. The biographer character is, in certain respects, the film’s comic relief but he’s also an integral part to the larger story because he’s symbolic of the change that’s taking place as the West becomes civilized and the people within it become mythologized. The film is bookended by a prologue and an epilogue which suggests this storytelling element and implies that everything in between is just another exaggerated tale woven by writers who want to sell books. The screenplay is very strong, weaving together ideas about mythology, criticism of celebrity-making culture, and a dash of hard nosed feminism (though, interestingly, it hardly touches on racism), while also creating finely etched characters who exist simultaneously as two people: the larger than life character and the real person living in its shadow.

I've always been pretty indifferent to Eastwood as a director. As a craftsman I’ve always found him solid but not extraordinary, though I think he consistently draws good performances out of his actors. With Unforgiven I finally see Eastwood’s directorial greatness, his skill at setting the tone and, in particular, his eye for composition. My favourite sequence of shots comes at the end, when Munny is riding out of town in the rain, a bad man once again, issuing warnings to everyone in his vicinity. There’s a shot of Strawberry Alice holding a light as she and others watch him ride away, back into the folklore from which he came. It’s a great and evocative sequence and makes for a fantastic ending.

To be honest, I too ain't a big fan of Eastwood the director. In fact, unlike most, I didn't really care much for his Million Dollar Baby, despite all the hoopla that surrounded the film. I liked his Mystic River though, though not as much as I'd liked the book by Dennis Lehane.

But Unforgiven, as you've incisively pointed out, belongs to a different class altogether. A fascinating Western, or Revisionist Western to be more precise, this movie had Eastwood at his very best, both as a director and as an actor. His character seemed to reflect what Man With No Name (Blondie) might have turned out had we got to seen him age in Leone's Dollar Trilogy.

@Shubhajit: I still haven't seen any of The Man With No Name movies, if you can believe it! Obviously I'll have to get on that and see how it compares to this one.